The male ninja Chameleon, who appeared in Mortal Kombat Trilogy was originally going to make an appearance in the Genesis/MegaDrive version of Ultimate Mortal Kombat 3. Unfortunately this character was never finished. The good news is, the unfinished version of Chameleon was never completely removed from the code of the game and he is still fully playable if you use cheat codes. 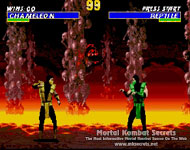 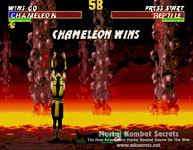 The current version of Chameleon uses Scorpion's sprites, pallets and combos and has no special moves.

Back when the game has been ported to the home systems, there were plans to release it for 3DO too. Unfortunately after the release of this version was pushed back twice, Williams Entertainment finally decided to cancel the project.

It remains absolutely unclear how far the development of the game actually went. Once is known, the ads for the game used screenshots from the SNES port.

After the release of the original Ultimate Mortal Kombat 3, Midway planned to release a version of the game with Network support and one additional hidden character, Noob Saibot. Unfortunately this version only reached testing stage in Chicago. MK3 Rides The Wave...

Introducing WaveNet MK3! (Last updated: August 9th, 1996) It's obvious in today's gaming world that people love long-distance competition. X-Band, DWANGO, and the other numerous gameing networks are evidence of this. And don't forget all the games that support net/modem play, DOOM, Descent, and basically every new game, to name just a few. Up until now, Mortal Kombat players have been confined to playing only against someone in the same room as you. Now all that will change. Now there is WaveNet MK3. WaveNet MK3 is in testing in Chicago, and allows you to play MK3 against someone else at another arcade in your area! When you start WaveNet MK3, you get a new screen, asking you whether you want to play WaveNet or Local. Select WaveNet and you'll be thrown into a whole new dimension of MK3. You type in a name you want to use, and then it looks for someone at another arcade waiting to play. It'll either find someone or put you back in Local mode while it continues to search. Once it finds someone, you'll start playing against them. Now you can really prove yourself as an MK3 warrior!

In addition to WaveNet MK3, there are also twelve WaveNet UMK3 machines in testing in Chicago. These have all the normal UMK3 fighters, plus one more hidden fighter -- Noob Saibot.
Go to top
Copyright © 2002-2022 Mortal Kombat Secrets - All Rights Reserved.
This website is in no way affiliated with Warner Bros. Entertainment Inc. or Threshold Entertainment.
Mortal Kombat, The Dragon Logo, all character and game names are registered trademarks of Warner Bros. Entertainment Inc.
Powered by E-ExtCMS. Script Execution Time: 0.115 seconds