Andrew Bowen, the voice actor behind Johnny Cage in both Mortal Kombat XL and Mortal Kombat 11 Ultimate, as well as both Rain and Smoke in MKXL specifically, has posted this picture on his Instagram of him along with the Warner Bros. water tower, and with the caption: "It's good to be back". 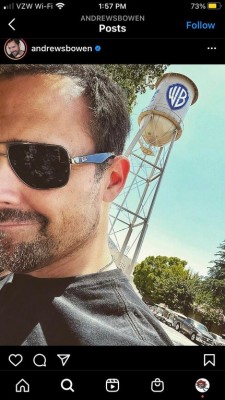 We have confirmed in our last news post that WB Games might be on verge of a split, yet it seems that we still might get a new update for MK11U, although it can still be related to an entirely new project. Then again, Bowen never did any role for WB Games other than voicing Johnny Cage, Rain and Smoke in the MK games, so we need to keep that in mind.

We will update you with more news as they arrive.

Author's opinion: As everyone knows, NRS have been very quite in the last several months regarding any updates for Mortal Kombat 11 Ultimate ever since the MK11U update came out with the exception of a couple of patches, including the one that we got just last week, and with the only new content that we got for MK11U is just the new Gear pieces that you can unlock in the 2nd rotation of the Kombat League seasons, but no new DLC updates with new characters or skins. This can very well be the reason for that, as obviously it would be very difficult for NRS to work on MK11U while they don't even know who will be their publishing bosses from now on.

That being said, I'm sure some of you are freaking out regarding the future of NRS and MK, but there's no need to worry. Mortal Kombat is a highly successful franchise, with MK11U also got over 8 million copies sold as of October of last year. There is no way that no one will be capitalizing on MK for it's guaranteed revenue. And everyone knows that no other company is better for making MK than NRS, so no one is gonna close them. Not to mention that NRS did tease new work just a few months ago, which can be a new update to MK11U.

So no one should be worried, NRS and MK are perfectly safe. Injustice, on the other hand, might be in a more questionable position though since it is a DC Universe franchise, which means it might be over due to the DC license being restricted between the studios after the deal, but we will have to wait and see for that one.

Mortal Kombat 2021 Movie Has Been Delayed By One Week

The screenwriter of the movie Greg Russo explained on Twitter that this decision has been made in order to give a breathing room for the Godzilla Vs. Kong movie and make sure that the two movies won't be too close to each other.

Ironically enough, the new date will also mark the 2-year anniversary for Mortal Kombat 11 Ultimate, as the game was released on 04/23/2019.

That's not a long delay by any means, and it's completely understandable why this super short delay has been taken place.

Over the past couple of weeks, Ed Boon Tweeted some very interesting posts regarding a certain Mortal Kombat character which does appear in Mortal Kombat 11 Ultimate, but only in cameo form in the Krypt, as well as other mentions like Towers of Time konsumables, intro quotes or certain special moves in the case of Shang Tsung. That character in question is of course the green male Ninja, Reptile. So far, Boon teased Reptile in various ways, whatever through a joke about a certain "lack of functionality", images of Kenny 'Unrooolie' O'Brien wearing a Sub-Zero mask from the Mortal Kombat (2021) Movie but with a green shirt on, a picture of the old Mortal Kombat Dragon MK-1 toy boat that includes a Reptile action figure, or just simply asking in trivia fashion what's the color of grass.

We already reported two months ago regarding NetherRealm Studios working on something new and teasing about it. Considering all of this, it appears that Kombat Pack 3 for MK11U is indeed in the works, and Reptile is indeed included as one of it's token characters. We will see if that's the case in the upcoming months, so stay tuned for more news on the matter as they arrive.