Note: The version of Mortal Kombat 3 for PlayStation 2, XBox, Nintendo GameCube, PlayStation Portable and PC (MAT: DE) is the original Arcade Version that runs on an emulator, which means that it is completely identical with the original one.

If Kabal is swept, and that sweep is the last attack; meaning you KO Kabal with a sweep, he will lie on the ground in the wrong frame. If you sweep him without winning, he lies down normally.

In the Kombat Temple background when you jump your shadow disappears behind the second background layer.

In version 2.0, choose Kabal and when it says "Finish Him!" perform his Animality without Mercy (Hold HP, F, F, D, F, release HP). This will reset the game. In the next version (2.1) this glitch has been taken out.

There is a bug in the program that will give you a free game. You must hit the start button during the cast of characters when Kano and Kabal just touch the ground...and the machine must be one of the first 2.0 versions (NOTE: This glitch may affect the programming of the game.) (NOTE: This glitch has been taken out in Revision 2.1)

1. If you can defeat Smoke by letting the time run out, you will fight Kano on that same stage.
2. Try perform some of Smoke's finishing moves while he is invisible.

Note: This glitch works on Sega Genesis too.

If you throw a net just after Cyrax does his helicopter slice fatality, the opponent will reform and you can pummel him, or perform a stage fatality. (NOTE: This glitch was taken out in Revision 2.1)

1. Just throw a grenade with Cyrax while performing mercy and see what happens.
2. Release a regular missile when playing as Sektor and perform Mercy.
3. Hold Low Kick, if you play with Liu Kang, Jax or Kano, while doing Mercy and release it.
4. Perform Sheeva's Teleport Stomp.

1. Throw rocket with Sektor and at last moment perform his dead press fatality. The victim will move away from the crush hit by the rocket, and crush will smash him without touch him.

2. Play Sektor vs Sektor in 2 player games, and while before you win, let the other Sektor throw a regular missile. Then kill him and while the rocket is flying over perform crash fatality. The screen goes black but you'll be hit by the rocket and you can still do moves or stage fatalities.

When Kung Lao runs, if you take a closer look you will notice a small arrow next to his hand. The same can be seen when you hit Jax and make him stagger back or when Stryker do Baton Throw. Obviously someone forgot to remove them 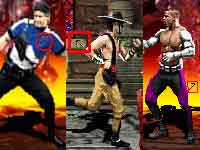 Where Is The Hat

Note: This glitch also works for Sega Genesis and SNES.

2. Sometimes performing (1) on Cyrax or Sektor will make them freeze not in the frame above, but in a different one (looks blue for Sega Genesis).

Perform Nightwolf Light fatality on Cyrax, Smoke or Sektor, when in the corner and see what will left oft from the cyber ninja.

Choose Liu Kang as your opponent. Sweep him and immediately run. You will be able to run through his body.

1. Spin with Kabal the opponent when it says "Finish Him/Her" and perform Stage Fatality while the opponent is still spinning. This will count as a Fatality but you will just uppercut the victim.

2. On the "The Pit III" stage, play with Shang Tsung. As it says "Finish Him/Her" do Ground Eruption and quickly perform the Stage Fatality.

Sometimes when your opponent jumps over you, you will still be able to sweep him, no matter that you will do the sweep facing the wrong direction.

Choose Smoke and a character who can throw in the air (Kano for example). If Smoke is thrown in the air, while invisible he will not appear as it is supposed to be. You can also perform Finishing Moves on him, while he is invisible. Note: This glitch also works for Sega Genesis, SNES, PC and PlayStation.

This is really a very rare glitch. The conditions needed for it's performing are not completely clear yet. Sometimes, when you perform Kung Lao's Hat Throw fatality in the corner, the camera will simply move and put you in the middle.

If you perform a late Animality, aka in the last moment but with your opponent already ded, there are two glitches that happen sometimes:

1. The Animal will not perform the move.

Beat Shao Kahn with the character you want. Before he explodes the collapsing temple will appear several times. When you see it (before Shao Kahn to be destroyed) press "Start" on the second joypad. Then run a two players game and you will fight on the secret arena in the air with the temple and the light that comes from Shao Kahn. If you try to make an upper-cut to your opponent the game will crash and the blue error screen will appear.

Choose Tournament mode and play with Sonya. Make so that the other player enough life to only be able to take one more Jump Kick, hit him with Jump Kick and do then Leg Grab. The next character that will jump, will be invisible until you hit him.

Enter endurance 2 players versus mode. Choose only Smoke. When Smoke is killed and the second one jumps in, he will have much more smoke. Fun to watch but may slow down and crash the game.

First, make sure Smoke, the two bosses and the pause are all enabled. Start one player game. At the select screen press start on P2 and do stealth select with both controllers (d-pad counter-clockwise). Manage to put both invisible cursors on the same characters (corner characters are easier) but let the selection time run out. The game will go to the choose your destiny screen. Start the match which should now have turned into 1-player mode. When the match begins press start on P2, the game will pause, then press start on P1. This will bring you back to the character select screen.

Choose Shao Kahn. You'll always be at the pit 3 and you will be able to fight your mirror matches. 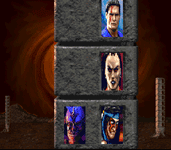 Motaro's icon will appear. Pick him and continue the game. You'll always be at the balcony and you will be able to fight your mirror matches (be careful with Motaro VS. Motaro). If the cpu launches those series of projectiles (and the two of you are close together) they'll simply bounce off the both of you until they go down out of sight and the game will mess up a little. 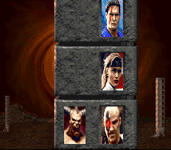 Ending the game with either boss causes the game to freeze after the " Kahn is no more...you are the new MK champion" thing. The screen goes black like an ending is forthcoming but it locks right there.

The One Button Fatality code must be entered

When you're playing with Smoke and you have one button fatalities enabled, wait until your opponents energy is down to where they can only take one more hit. Get as close as you can to them and fire the harpoon. Then, immediately press the "B" button to activate the fatality. The harpoon should still be in your opponent. Smoke will attempt to drop the bomb in the opponents mouth but it will freeze in midair - all music stops. It will stay frozen even while announcer says "Smoke wins - Fatality". 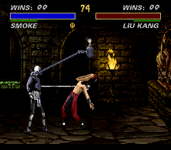 Get your opponent's energy down so that he can only take one more hit. Make the last hit an uppercut and when he is flying through the air, immediately hit the run button to do the Babality. The opponent will turn into a baby but will stay suspended in mid-air. 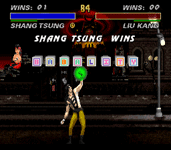 Keep in mind that you can only do a one button Stage Fatality on The Subway, Pit 3, and Tower stages. If you try it anywhere else, an interesting thing happens. Your character will simply uppercut the opponent. The other player will stand up and stagger for about four seconds while your character stands in his/her winning stance. After the fatality time runs out, the announcer will say that you did a fatality. All the while, the "fatality music" is playing and never stops. 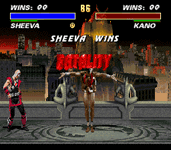 Get your opponents energy down to where he can only take one more hit. Get as far away from your opponent as you can and do a hat toss. When you throw the hat (assuming that it connects), immediately press the run button to do the Babality. The Babality will happen as normal but Kung Lao's hat will be a bright blue color. 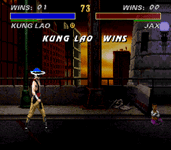 Ok, here's the pattern. Player x (either player 1 or 2) wins the first round. Player y wins the second round (whoever lost the first must win the second.) Now pres LK to perform the friendship. Best part about it, your opponent can fight you while you're doing the friendship! This produces some *really* funny effects. Try performing Nightwolf's Friendship. You can beat Raiden: 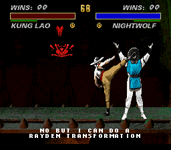 Enable this: Kool Stuff: Enable Pause - Kooler Stuff: Quick Finish
With this kind of glitches the opponent must be on "Danger!" then you must do a special move, press start and press any button, press start again and you'll see a glitch.

- Press D, F, HP, press Start, then press A and Start again to get the axe and Raiden at the same time. 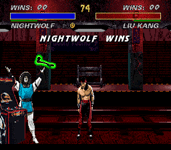 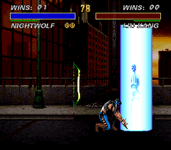 Press B, B, LP , press Start then press Run to get the hook and the baby or Low Punch to get the 2 hooks. 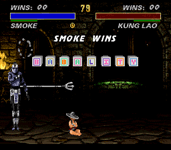 Press D, F, HP, then press start and A, press start again and Kano's Knife will be on the air while Kano makes his Friendship, you can do the same thing pressing D, F, LP to get something similar.

Pick Shang Tsung, morph into Cyrax. Wait about 10 seconds. Then do a net attack. Quickly morph into Sheeva, and perform your fireball move, while your opponent is still captured in the net. The results will be different if you're P1 or P2.

During Fatality time quickly do two Screams. As soon as the second Scream is done, your opponent will come back to life.

Drop a bomb and immediately perform Cyrax' Fatality. After the Fatality is over you can walk around, but you must not touch your opponent's pieces.

Cyrax' green net is totally useless if your opponent is Kabal. You can only catch him if he is in the air.
Go to top
Copyright © 2002-2022 Mortal Kombat Secrets - All Rights Reserved.
This website is in no way affiliated with Warner Bros. Entertainment Inc. or Threshold Entertainment.
Mortal Kombat, The Dragon Logo, all character and game names are registered trademarks of Warner Bros. Entertainment Inc.
Powered by E-ExtCMS. Script Execution Time: 0.104 seconds