In Early Stage Of Development

Below are three pictures of Mortal Kombat 3, showing the game in one of the earlier stages of its development. The first one shows an early version of the character select screen, that still uses an old Mortal Kombat 1 and Mortal Kombat II sprites. The second and the third picture show a battle between Sindel and Jax. But the "Round 1" sprite is the one from the original Mortal Kombat. The "Fight" sprite has never been seen in previous game. Both were later replaced. 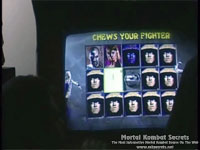 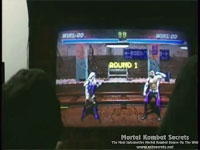 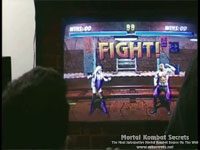 Motaro was tossed in as somewhat of a last-minute addition to MK3? There were plans to create a fighter with two big hammers as sub-boss, but this was scrapped. The hammer was given to Shao Kahn, and the Centaur was created to serve as sub-boss.

In advertisements for MK3, Johnny Cage was killed by Motaro? Possibly Cage's death was directly related to Daniel Pesina's termination from Midway.

During the development process of MK3 Sektor's and Cyrax' names were 'ketchup' and 'mustard'. Cyrax even had the name "Robocop" at one point. 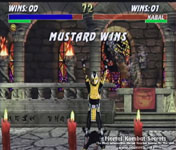 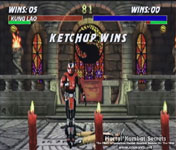 The design of the cyberninjas was inspired by the alien from the movie "Predator"? Cyrax was almost going to be Scorpion's cyberform?

Just like Cyrax and Sektor, Sindel did not have a name for a long time during the production of the game. A name that was used for her was "Muchacha".

The Story Of Stryker

Originally, the character Kurtis Stryker was supposed to appear in MK1 at Sonya's place, but he was scrapped early in the development process when beta tests revealed player's interests on a female character (Sonya replaced him). Later, in MK2 Kurtis Stryker made it almost to the final game, but had his name changed at the last time to... Jax. Finally on MK3 a completely new character named Stryker made its appearance.

Stryker's victory pose had a different gun fire during the production of the game:

Kabal's working name was Sandman. The original idea behind this character was to give him two buzzsaws instead of the tigerhooks. Later this character has been updated and Kabal was born.

The original design of Kabal also had a backpack and a coat. Unfortunately the technology that was used at the time did not allow them to be part of the costume. In Mortal Kombat: Deception the team had the opportunity to model the character according to the original idea behind him. 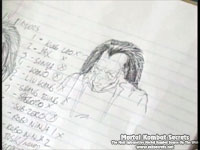 This is an early 3D version of the Graveyard.

According to this early screenshot of the SNES version of the game, the Graveyard was supposed to be included in this home port of the game. Unfortunately this didn't happen. 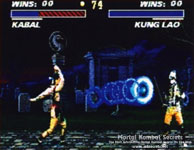 The original version of "The Bank" stage had a red carpet on the floor. For some reason the carpet was removed in the final version of the game. However the carpet returned in Mortal Kombat Trilogy but not in its original design. 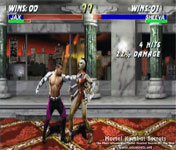 In early versions of the game, the arena we know as Shao Kahn's Tower had 3 large bells , that never made it in the final version of the game. Later, the arena Bell Tower in Mortal Kombat: Armageddon has a Bell. 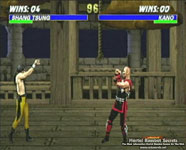 "Tobias Tower" is the working name of the arena that we all know as "Shao Kahn's Tower" or "Bell Tower". 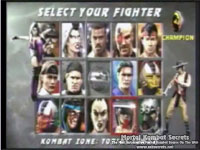 The Macintosh port Mortal Kombat 3 was developed during 1995-1996 but never hit the streets. The port effort was publicly known: at least one major Macintosh software retailer listed the game in its mail-order catalog and took advance orders. The catalog ad copy identified the creator (Midway), publisher (GT Interactive), and developer (Digital Eclipse). 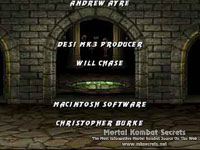