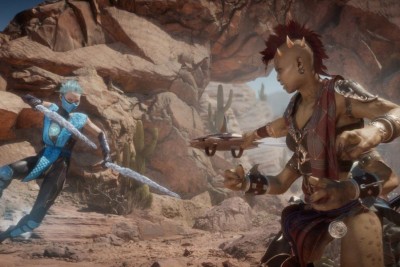 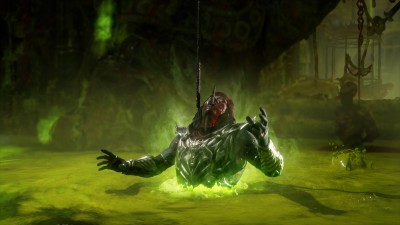 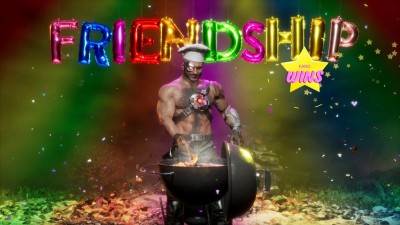 Arcade machines are known for massive size and high price, but if you could get one of those machine, it would defiantly worth it for long time gamers of the golden days of Arcades, including for the old school Mortal Kombat players who grew up playing MK games at the Arcade. But what if you could play an MK game on a small, mobile Arcade machine? Well, it's seems it is possible.

Pro MK player and YouTuber Ryan "Ketchup" Neal made of video showcasing a gift that he received, a tiny mini Arcade machine of Mortal Kombat 1 (with a side-render of Scorpion from Ultimate Mortal Kombat 3) created by a company called "Basic Fun". And yes, by "tiny", I mean it literally. It is essentially a handheld console in a shape of an Arcade machine, completely stand-alone and, doesn't plug into anything and is battery-powered. The machine comes with a small Arcade stick and 6-buttons, with the Block button receiving two buttons that can be pressed for it (they are both located next to each other) and this port of MK1 is the Sega Genesis port of the game, as the graphics and soundtrack of the game indicate this. Obviously, you can't play against other players on this, but you can still play all 7 of MK1 characters in the full Arcade mode, along with the Reptile secret match, Endurance matches, Boss matches against Shang Tsung and Goro, and the Test Your Might mini game.

A very interesting port indeed which would be a nice addition to the collections of MK fans. If you're interested to find more about Basic Fun and their port of MK1, click here.

Ed Boon Teases Both Smoke And Micheal Myers For KP2

Ed Boon keeps the teasing for Mortal Kombat 11 going, and this time he goes from two directions, both of MK characters and guest characters.

First, Boon posted this Tweet about smoke alarms, which is an obvious tease for the MK gray Ninja, Smoke, who was a part of the MK franchise since Mortal Kombat II, both in Human and Cyborg forms.

And then, he posted this Tweet as well, using the current worldwide events to tease a guest character that was on the conversation among fans for a long time, the iconic horror movie character from the Halloween franchise, Micheal Myers.

Are those indications that both Smoke and Micheal Myers will make it to MK11 as part of Kombat Pack 2? Only time will tell.

The Mortal Kombat 11 gameplay trailer for the newest DLC character for the game, the Joker, has finally arrived. Voiced by Richard Epcar, Joker show a whole slew of new tricks to show his dark humor while battling his opponents, along with several Easter Eggs and references to both the Mortal Kombat and DC Comics Universes, including a reference to the Friendship Finishing move that was introduced to the Mortal Kombat franchise in Mortal Kombat II.

The trailer also showcases 4 new skins, all are inspired by the DC Universe. The first 3 skins are coming in the DC Elseworlds Skin Pack and those are for Noob Saibot as The Batman Who Laughs (an evil Hybrid of Batman and Joker), Baraka as Killer Croc, and Kitana as Catwoman. And the final skin is an additional one, and it's for Geras as Darkseid.

Author's opinion: I myself was in favor of the Joker coming to MK11 before MK11 was even announced. Considering the more recent DC Comics stories that feature Joker as much more violent and gruesome villain (more specifically in the Death of the Family Saga, in which Joker rips his own face and put it back on as a mask), as well as that Joker, in a way, already was a guest character in Mortal Kombat 9 (2011) through Shang Tsung's Fatality that was based on Joker's Fatality from Mortal Kombat Vs. DC Universe, and the fact that the Injustice franchise already had all of the top Mortal Kombat mainstays Scorpion, Sub-Zero and Raiden, as guest characters in both Injustice 1: Gods Among Us and Injustice 2, there was no doubt that Joker would be a perfect guest character for MK11, and it was bound to happen, and I'm very happy that it happened. This trailer exceed my expectations and I'm very excited for Joker to come to MK11 eve more that I already was before.

Make sure to watch the MK11 Kombat Kast for the Joker, who will be added to MK11 along with a the new skins on January 28th, 2020.

In previous news posts, we reported on the Speedrun world records for Ultimate Mortal Kombat 3 set by players Ryan Neal AKA Ketchup and Lee Woods, and also for Vanilla Mortal Kombat 3 set by player Outworld. Now Ketchup has put together an amazing video detailing the history of UMK3 Speedrun with all of the records that were set by players and all of the tricks being used by them, as well as the controversies surrounding some of the methods used for those Speedruns, and even a quick glimpse at the history of Speedruns for Mortal Kombat II and Vanilla MK3.

Check out Ketchup's video below, enjoy.