Another Mortal Kombat Reference In The Last Of Us Media

by Roy Arkon on Feb 1, 2023 :: 0
We all know that Naughty Dog, the creators of the Last of Us franchise, are huge Mortal Kombat fans, and it clearly shows with the Mortal Kombat II poster that they added as a reference to MK in The Last of Us Remake. And now, the Last of Us has made another MK reference, except this time it's not in a video game form, but rather a TV show form.

On the latest episode of HBO's The Last of Us TV show. which is based on the game series, there was a scene in which the two main characters, Ellie and Joel, come to an abandoned building in search for supplies, and Ellie comes across an Arcade machine in the room. This scene also happened in the game (to be more accurate, in the Left Behind DLC), except that in the game, the Arcade machine was of a fictional fighting game called "The Turning", and there is character in that game called "Angel Knives" that had access to a finishing move with which she would punch a hole through the opponent's stomach before kicking the opponent's head off. That one in in itself was already an MK Easter Egg, particularly for MK's iconic Fatalities. In the episode, however, the Arcade Machine was changed to be an MK2 Arcade Machine, and the character that Ellie mentions is non-other than Mileena, and the finishing move that Ellie talks about was changed to be Mileena's "Man Eater" Fatality in MK2.

Always awesome to see references that are related to Mortal Kombat, either from MK for another franchise or vice versa, and this one is no exception.

by Roy Arkon on Oct 5, 2022 :: 0
In 1994, Midway released one of their most successful and popular games ever, NBA Jam. On top of everything the game had to offer, it also included a ton of Mortal Kombat secrets and Easter Eggs, from references to already-released MK games in Mortal Kombat 1 and Mortal Kombat II, to hints for the release of Mortal Kombat 3 Vanilla which came to fruition the following, to even having several MK characters making to the game as hidden guest characters. These are the 3 playable MK Ninjas of MK2, Reptile, Scorpion and Sub-Zero, along with Raiden. That's not all though, as NBA Jam actually had hidden Fatalities, which could've happen by pushing players from the opposing teams with the MK characters. Guess it is only natural, when there are MK characters and voidance involved, it's gonna go down to Fatalities

And on top of that, this game also had references for other already-existing and future Midway games, such as an advert for WWE WrestleMania: The Arcade Game, which would be released the following year.

That being said, the MK characters have been taken out of later revisions of the game. Thankfully, longtime fighting game YouTuber named Desk has managed to get an earlier version of the game, showcasing how to unlock the MK characters and Fatalities, along with all of the refences and Easter eggs, both that are related and not relegated to MK.

Check out the video from Desk below, enjoy.

Is MK4's Arcade Port Being Re-released In The Future?

It seems however that there is a movement for bringing back MK4 in it's Arcade version, along with the proper hashtag of #FreeMK4. Ed Boon himself noticed that and responded to it with this Tweet, showcasing an MK4 Arcade cabinet with the iconic Quan Chi side panel along with an image of Quan Chi himself from Mortal Kombat XL:
Of course there is no guarantee that this will lead to anything, but the movement to bring back the Arcade version of MK4 seems to be going strong. A similar movement happened not too long ago for Marvel Vs. Capcom 2 from the Marvel Vs. Capcom series, which ultimately led to the re-release of that game by Arcade1Up just a few weeks ago, and it already sold out. On top of that, while Ed Boon and NetherRealm Studios are ultimately bent to the authority of WB Games, Boon can have a convincing speech with WB when it comes to crucial or very beneficial matters, such as he did for the PC port of MKXL. Yes we all know how it began, and it's still like that for an extend even now, but it's still at a much better state nowadays, and it's all thanks to Ed Boon.

All things considered, this can lead to the re-release of MK4 in it's original Arcade version to finally come to fruition, at the very least via Arcade1Up, if not even via home consoles and PC as well. Let's hope that WB would see the value in such investment, which will at the end benefit everyone.

by Roy Arkon on Sep 22, 2022 :: 1
In just above a couple of weeks, Mortal Kombat will celebrate it's 30th anniversary, and we got yet another origins story en route to the occasion, this time from John Tobias, with the main topic being origins of the iconic MK dragon logo, and how it led to various other stuff being given and made for the series, including the Mortal Kombat name.

Tobias starts the story by sharing a recently discovered image of the first drawing of the MK dragon logo, followed by how fellow MK team member, John Vogel, used the digitized graphics system of Mortal Kombat 1 to literally digitize the drawing into the character select screen of the game.
Tobias then shares that the original planned for the game was supposed to be "Dragon Attack", a name that came for a song by the iconic band Queen, of which Ed Boon is huge fan of (and they were even given a reference through Rain's 2nd Fatality in Mortal Kombat 11 Ultimate). That is, of course, until both Boon and Tobias changed the title to Mortal Kombat. Tobias also shares that this was the inspiration for using a dragon as the symbol for the tournament, although not as the logo for the whole series at that point yet.
Tobias continues the story by saying that the idea of using the dragon symbol as the overall logo for the series came from a golden dragon statue that was on the desk of Ken Fedesna, the general manager of Midway at the time. This also led to the addition of the golden dragon statue at MK1's Shang Tsung's Throne Room stage as well as the dragon on the side panel for the game's Arcade machine.
As you can see, the original logo had the dragon facing left. However, until Mortal Kombat II, the logo was used facing both sides for the Arcade machines. With Acclaim's console releases of the games, the MK choose to keep only the right version of the logo as they could've only use one for marketing purposes. Tobias then shares that the final design for the dragon icon was an attempt at replicating the yin yang symbol, which represented balancing of the furies- a core part of MK’s early fiction
Tobias ends the story a couple of extra notes: Firstly, he tells the he almost tossed the sketch for the dragon icon thanks for his sister, and finally, he shares a picture of the same golden dragon statue that was used for the logo, that was found by Boon 30 years later.
This is a classic case of the domino effect, as one idea have led to so many other things that we are know and familiar with in the MK series. Looks like the dragon has indeed scorched a ton of land, and marked it's territory by a flame that still burns strong for 30 years, and nothing is going to extinguish that flame.

by Roy Arkon on Sep 7, 2022 :: 1
The Mortal Kombat series has been full of references and Easter Eggs over the years, both from it's own series and other series as well. This however is one of the cases of another series making a reference to MK.

In The Last of Us Remake, as shown by the Naughty Dog Central Twitter page, there is a shot in which a Mortal Kombat II poster can be seen on the wall. This shot is taken from a cutscene in the Left Behind DLC update for the game. 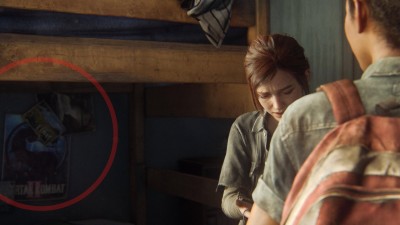 Keep in mind that this is only seen in the remake, but not in the original game.

A fun fact, one of Naughty Dog's very first games was a fighting game called Way of the Warrior, which was a glorified MK clone, which obviously flopped. Naughty Dog are clearly fans of MK, and perhaps in the spirit of the upcoming Mortal Kombat 30th anniversary, they felt it was the right time to pay homage to the iconic fighting game franchise. And it surely is an awesome one at that.

Did you like this update? Then follow us on YouTube, Facebook, Twitter and Discord.
Page 1 of 29 NEXT> LAST>>
Go to top
Copyright © 2002-2023 Mortal Kombat Secrets - All Rights Reserved.
This website is in no way affiliated with Warner Bros. Entertainment Inc. or Threshold Entertainment.
Mortal Kombat, The Dragon Logo, all character and game names are registered trademarks of Warner Bros. Entertainment Inc.
Powered by E-ExtCMS. Script Execution Time: 0.16 seconds