Originally planned as a regular playable character, this tiger-like humanoid was based on the Japanese mythological figure, Kintaro. According to the legend he was abandoned in the mountains and grew up among the tigers. However, constructing a costume of this magnitude simply wasn't feasible. Kintaro's name and tiger stripes were retained when the new Goro-relative boss was created.

This female fighter was based on a real-life kick-boxer named Kathy Long, who Tobias admired and thought to be a totally noble person. She was dropped due to time constrains.

Baraka is the character that definitely went through the hugest amount of transformation during the development stage of the game. He started as the man with the hook swords (the picture located left of the text), then he slowly morphed into the character we all know. The picture and the description are located under this text. 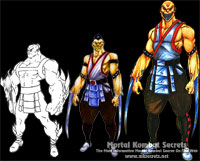 The original Baraka mask pictured on the image above was not used in the game, due to the fact that it was disproportionately large and didn't fit well. Instead, a Nosferatu mask was purchased from a nearby costume shop and equipped with teeth made from Lee Press-On Nails! 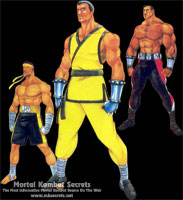 Jax started as an African-American kickboxer, but this idea was discarded due to similarities with Balrog (from Street Fighter 2). Then he donned a yellow costume with big metal hands that "clanged" upon contact. However, this outfit concealed much of actor John Parrish's impressive physique, so Jax went shirtless.

At one point Tobias was going to add a staff to Raiden's thunderous arsenal, but there wasn't enough computer memory to allow it. But the staff after appears in Mortal Kombat 4.

The original Johnny Cage costume had the line "Otomix" written on his pants. The reason of its disappearance in the final game is unknown. However, someone on the team forgot to edit a few of Johnny Cage's sprites and you can still see the original outfit in Shang Tsung's Soul Steal Fatality. 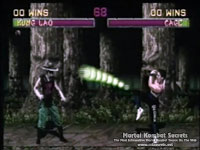 When Shang Tsung was granted a youthful body, Tobias sketched out the transformation from wizened old man to a spry 19-year-old. The demonic creature represents Shang Tsung's true form, which we never see in the game. 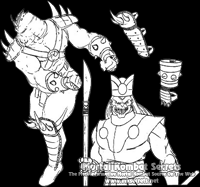 Originally everyone in the Outworld was planned to be of Baraka's race, and thus Shao Kahn started with the gnashing teeth. Tobias originally conceived the boss as a skeletal creature, but decided Kahn looked too much the part of the scheming Chinese mystic like Shang Tsung. Kahn evolved into an all-out-warrior who lives for battle.

An early version of the Kombat Tomb arena was a little bit different. For example the Yin Yang symbol on the background is missing. 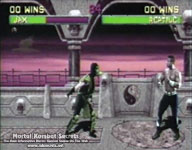 The Tower Stage actually had four big statues placed on both ends of it. Those probably got cut to save memory. Similar statues later appear in Mortal Kombat: Shaolin Monks before the battle with Reptile. 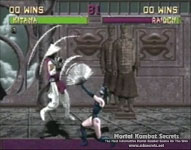 In Mortal Kombat II Baraka was supposed to have a Blade Spin Special Move. But this move was a too big advantage. So it was removed. Later this special move appeared in Mortal Kombat Trilogy.

An early Sega Genesis/Mega Drive build of the game actually had the names of the fighters displayed under their life bar, much like the SNES version of Mortal Kombat II. This later changed and the text was put back in the life bars, like the arcade version. 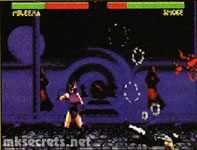