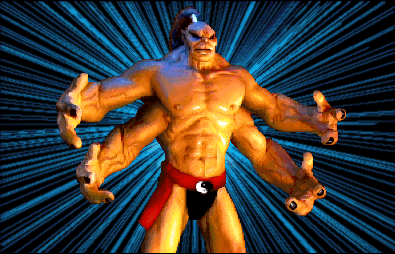 A 2000 year old half human, half dragon, Goro has remained undefeated for the last 500 years. He won the title of Grand Champion by defeating Kung Lao, a Shaolin fighting monk. It was during this period that the tournament fell into Shang Tsung's hands and was corrupted.

Attention:
The imperial court of immortals
invites warriors of all styles
to compete in a tournament of

The ancient tournament was once a competition for martial arts honor until championed by the evil Prince Goro. Half dragon and half human, by the hands of an evil spirit Shang Tsung, Goro has weakened the barriers of the Earthrealm. Now 500 years have passed, and it is time for a new warrior to win more than just honor. A warrior must win to save the fate of the world!