Mortal Kombat appears as an alternative of game that was supposed to have Van Damme as a main character. "Unfortunately" the work on this game never started, because Van Damme could not participate in it, and so Ed Boon and John Tobias start working on a new project - Mortal Kombat.

Before Mortal Kombat was chosen as name for the game, there were a lot of different proposals, including Kumite, Dragon Attack, Deathblow and even Fatality. Then Steve Richie added the word Mortal to the already written down word Kombat putting together the final name of the game.

The original name of Liu Kang was Minamoto Yo Shin Soo. This was in the very early stage of the development of the game. This comes from the Ultimate Guide to Mortal Kombat CD ROM. Other info comes from interviews with John Tobias:

"Tobias: The actual Liu Kang character with the long black hair and black pants was originally going to be called Minamoto Yo Shin Soo. [laughter] He was a Japanese mythological character, but I think we just couldn't deal with the name." -MK3 Official Kollector's Book, p.5.

"We were going to do a big barbarian character," he [Tobias] continues. "I don't know how to describe him; he was character out of Japanese mythology. We axed him, but we sort of did that [anyway] when we came up with Goro, because he was going to be the big brute. There was a character called Minamoto, this is way, way into the early stages, but he got axed." -Mortal Kombat Magazine #1, p.29.

Liu Kang was supposed to be bold, just like any other Shaolin Monk. The only reason why this didn't happen is that the actor, who played him, Ho Sung Pak, refused to shave his head. On the other hand, the actor Richard Divizio was eager to take the razor and give us a bold Kano.

Tundra was the name of an early version of Sub-Zero, when the uniform was different.

This comes from the Ultimate Guide to Mortal Kombat CD ROM, and seems to be an early version of Goro.

The Rokuro come from Japanese mythology/folklore, and one of the most well-known stories about these entities was translated by Lafcadio Hearn in the early 1900's in his book called Kwaidan. In 1964, stories from Kwaidan were turned into a film of the same name, but Rokuro-Kubi was not among them (the tone of this particular story would have been at odds with the creepiness of the rest of the film). As for the Rokuro being in Mortal Kombat, they would have made for some interesting combatants.

This character was planned for Mortal Kombat 1, and he has Sonya's story. Kurtis Stryker is not the one we know from Mortal Kombat 3. It is actually the one we all know as Jax. I hope the following quote will make all things clear:

"JT: Jax was called Kurtis Stryker a long time ago, because Jax originally was going to be in Mortal Kombat 1, but we did him as Kurt Stryker, and his story was actually Sonya's story.

EB: When we decided to add Sonya, we took the story line and applied it to her. We always wanted to bring Jax back, and that's why we brought him into Mortal Kombat II..." -MK3 Official Kollector's Book, p.5.

MK1 was planned for TurboGrafx 16/PC but NEC refused Acclaim the license for obvious reasons at the time.

Liu Kang first had a text on his pants that says Otomix (Otomix is an actual established supplier of martial arts and athletic wear). For the sole purpose of not advertising Otomix the text was edited out of the sprites. 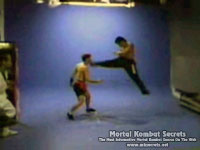 Early screenshots of the GameBoy version of the game show a background that was never added in the final product. Also note that Shang Tsung appears on an arena different from Goro's Lair. May be he was a playable fighter too, until some point. 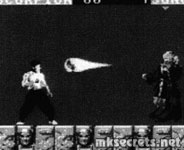 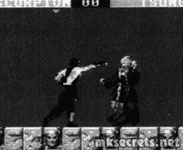 These early screenshots reveal that there were plans to make the two boss characters playable in the Sega Genesis, SNES and SMS/GameGear versions of the game. On these images you can see these two fighters on arenas different from Goro's Lair. Note that they also have points, which is only possible, when someone is playing with them. Note too that the Sega Genesis port uses x-es to mark a winning round. 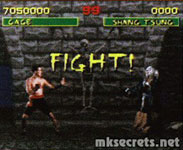 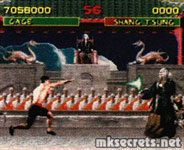