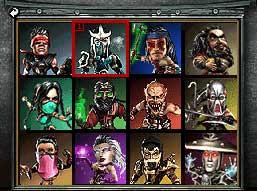 This mode is a tetris like kind of game. Your goal is to collect as more blocks of the same color as you can and than blast them with the Dragon Symbol block sending them directly into your opponents field. The very small versions of twelve Mortal Kombat characters will react to everything you do, making this mode really fun to play.

Puzzle Kombat has twelve character with special powers that will help you during battle.

Baraka
Special Move – Edger (Baraka's blade arms come and destroy the two edges of your screen. All blocks that were there are there no longer)

Sub-Zero
Spetion Move - Freeze (freezes the enemy's block for about five turns, so that the player can't see their colors)

Each arena in Puzzle Kombat has a unique Stage Fatality

Sky Temple
Fatality - Lightning (the losing player will be struck by lightning, their head will explode, and their eye will hit the screen)