Dominic Cianciolo, the story and voiceover director of NetherRealm Studios, has set with Gamespot on their Audio Log show to talk about the Mortal Kombat 11 story mode, both in the base game and the Aftermath expansion. In this video, Ciandiolo explains how the team came up with and implemented the time travel storyline in MK11, and how they were influenced by other pop culture franchises such as Westworld and Back to the Future.

As you might remember, the Mortal Kombat 11 Aftermath expansion included 3 skin packs, and also an exclusive Johnny Cage Skin for those who purchased the expansion, named the "Thanks a Million" skin. Now Ed Boon has reveled via Tweeter the Skin Packs for MK11 Aftermath as well as the dates. 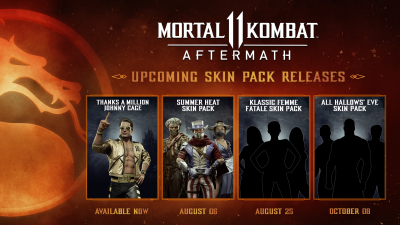 As you can see, the "Thanks a Million" Johnny Cage Skin is already available right now for Aftermath expansion owners, and for now we know the following details for the Skin Packs:

Also on a side note, the Baraka Skin in the Summer Heat Pack is a reference for the YouTube comedy show called Mortal Komedy, which is based on and inspired by Mortal Kombat.

So now that we know the dates for each Pack, now we only have to wait for each Pack to arrive. As for the last 2 Skin Packs, stay tune for when the final details will be revealed for them as well.

ComicBook.com has posted a new article regarding the new Mortal Kombat Movie, stating that the progress of the movie still continues despite COVID-19 and the movie is still set to be released on January 15, 2021. In addition, the article mentions that the Fatalities in the movie will use more practical affects rather then CGI, and according to writer Greg Russo, the movie isn't going to include Fatalities that we haven't seen before, but they are also not going to be there for the sake of being there alone, and will have an actual point of being in the movie, just like with everything else in it.

Check out the link above to read to full article.

Ed Boon is coming with what can possibly be another character tease, in a 2 for 1 special for that matter. First, Boon has Tweeted this trailer, confirming that Human Smoke is coming to Mortal Kombat Mobile, which features his iconic Living Forest secretive lurking hint from Mortal Kombat II.

This could've end right here as it officially confirms that Human Smoke is coming to MK Mobile, but it didn't. Almost immediately after that Tweet, Boon came with another one, featuring Scorpion, Human Smoke (with the same render from the MK Mobile trailer) and Ermac.

This might be nothing more then just another tease. However, with the high potential for more characters and content for Mortal Kombat 11, it seems that this could lead to the inclusion of both the Red and Gray palette swap Ninjas for MK11. We will see what happens in the upcoming months.