Congratulations to MK11 for taking yet another award.


Getting Skeleton Keys From Meteors In The Courtyard

As you might know, Skeleton Keys, which can be used in Mortal Kombat 11 in the Krypt to either open certain doors or as most recently being patched, being sold to Kollector to get Summoned Towers Keys for the Towers of Time mode, can be obtained by either opening chests in the Krypt or as recently being patched, ripping off hanging bodies throughout the Krypt. Now it turns out however that Skeleton Keys can also be obtained by smashing the meteors that can fall into Shang Tsung's Courtyard, either by itself at random times or by using the Ash of the Red Dragon.

Here is a video from my YouTube channel, showcasing me getting a Skeleton Key from the meteor.

Another surprise has received to Mortal Kombat 11, as for next couple of weeks, until 01/04/2020 to be exact, the MK11 Time Krystal store will now include the Mortal Kombat II Klassic Female Ninja Skins for Jade, Kitana and Skarlet on a daily rotation, all included in bundles with Gear pieces and fight intros/outros to match the characters.

As of making this news post, the current bundle available at the moment is for Skarlet, with two MK2 Klassic Ninja Skins, along with 3 Gear pieces which include the Klassic MK2 Female Ninja Mask, and also a fight outro. 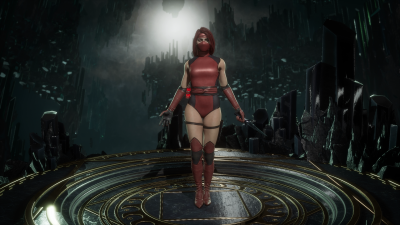 It is very important to note that the prices for bundles in the store are lower then what they would've been if you would like to buy all of the times desperately. Also, if you already a some of the items in the bundle, the price for the bundle will be reduced accordingly to match the already reduced price for the items that you don't have. So with that in mind, go to the store right now and get the bundle with the MK2 Skarlet skins while you still can, and stay tuned for the more bundles to come for Jade, Kitana and Skarlet.

We got a ton of news regarding Mortal Kombat 11 in context of game awards, so let's get to it.

That's not to say that MK11 didn't had any impact at the Game Awards show though, as Facebook Gaming, in collaboration with the Game Awards show as part of the campaign for highlighting the work that women have made for all of the games this year, have given the recognition for Shannah O'Meara, a Senior Artist of Cinematics at WB Games, for all of the work that she had put for designing the iconic Fatalities in MK11

And last but not least, MK11 has dropped one more thing for us to look for, and that is a teaser for the next DLC character in the game, the Joker, once again being voiced by Richard Epcar who voiced both Raiden and Joker in all of the NRS games since Mortal Kombat Vs. DC Universe, in an intro with Cassie Cage in her Harley Quinn skin. As you can see, Joker's face have been remodeled to fit him more.

Congratulations for Mortal Kombat 11, NetherRealm Studios and WB Games for winning IGN's Best Fighting Game Award for 2019, and Congratulations to Shannah O'Meara for getting the recognition for her amazing work on the MK11 Fatalities. And with that being said, stay tuned for more news regarding the Joker in MK11.

Yes, you read it right. In a huge surprise out of nowhere, NetherRealm Studios have announced on their official Twitter page that they will be testing an online Krossplay feature for Mortal Kombat 11. It should be noted that this feature is currently only for the PlayStation 4 and Xbox One consoles, and doesn't include the platforms of PC, Nintendo Switch and Google Stadia. Also note that this is a beta, so keep that in mind.

Here is the Tweet from NRS' Twitter page, which also includes a link to an FAQ from from WB Games' Mortal Kombat Support website, with all the details you need to know about this beta.

This is huge news without a a doubt, only very few games get to have an online Krossplay between two separated consoles, and none of those so far were from the Fighting Game genre. While Street Fighter V had a Krossplay between PS4 and PC, Mortal Kombat 11 is the first Fighting Game to add Krossplay between two separated consoles, the PS4 and XB1. That goes to show how big, important and successful MK11, and this might open the door not just for other platforms to be included in that feature for MK11, but to have other fighting games to include it as well.

Stay tuned for more updates on the manner, and if you play on either PS4 or XB1, feel free to test the online Krossplay feature for MK11.