As everyone is looking forward to see the full roster for Mortal Kombat 11, a Twitter user has tweeted in a joking fashion that Ed Boon has been confirmed to be included in the roster. Boon, in yet another good old fashion act of teasing, has responded with this tweet below: 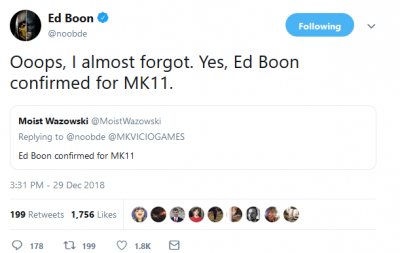 At first glance, this seems like yet another joking response, but could there be more to it? Could it be a tease for Bi-Han's return in Mortal Kombat 11. After all the original Sub-Zero turned into Noob Saibot and Noob Saibot's name consists of the surnames of MK Co-Creators Ed Boon and John Tobias spelled backwards.

Will Noob Saibot return as a playable character in MK11? We will find out soon.

The remastering of the The History of Mortal Kombat series continues today with Episode 03. This episode centers around Mortal Kombat 3 and the very much beloved Ultimate Mortal Kombat 3. The premier of the episode and the live chat was watched by 80 people and was a lot of fun for all of us. In case you missed it, you can enjoy the episode right now:

Make sure to tune in for the next premier for a chance to discuss the episode with the people involve in its production.

Ever since Mortal Kombat 11 has been announced, the Internet has been full of rumors and supposed leaks. Up to the point where the entire roster of the game was apparently leaked.

A Twitter user by the name of Johnathon McNaugton responded to Ed Boon with the leaked roster in the following Tweet when the MK co-creator teased the blind swordsman Kenshi for MK11. Ed Boon didn't wait long enough and responded in the following tweet negating the validity of the supposed leaked roster and also confirming that the actual roster is very different. 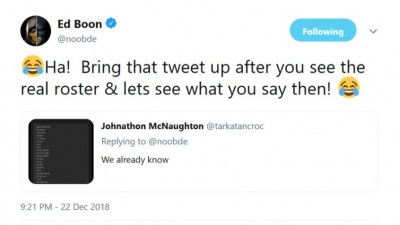 So when will we get actual information regarding the MK11 roster? Will it be at the MK11 Community Reveal event next month, or will we get some character reveals before that? Until then, let's all take any leak that might come with a grain of salt.

Mortal Kombat 11 is now available for pre-order on Steam, both the Standard and the Premium Edition. The page includes an image of Shao Kahn in a more klassic skin then the one that was shown in the announcement trailer. The same image was leaked some time ago buy Gamestop Italy.

The page also gives more details about the Premium Edition of Mortal Kombat 11: 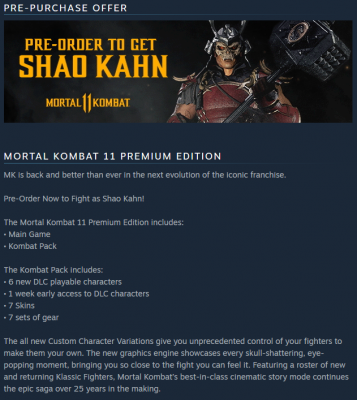 This confirms several pieces of information that were rumored and/or leaked to be true, such as the inclusion of 6 characters in the Kombat Pack and the return of the Gear system from Injustice 2. Speaking of which, one interesting thing that is seen there is the inclusion of both skins and Gear.

Does this mean that skins and gear are separate from one another? Or the skins are basically premier skins inside the gear system similar to IJ2? We will have to wait and see. In the meantime, check out the MK11 page on Steam here.

Luiz Mictian is already well known within the Mortal Kombat community with his 4 Kitana centered fan comic books, which we featured in this article.

Yesterday he released the first part of a new 4 issues story called Mortal Kombat: The Forsaken. Take a look at the preview video:

Want to ready the new story, it is free for you to enjoy. 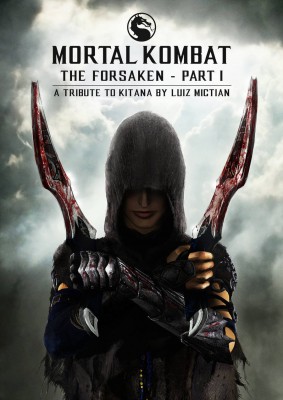