Mortal Kombat Co-Creator and head of NetherRealm Studios Ed Boon has been interviewed on the Jace Hall show, which Boon wanted to be a part of for a long time.

In this interview, Boon talks about a few things regarding MK such as how MK was a part of the creation of the ESRB rating system, and he also talks about Injustice 2. However, a lot in this interview is being presented in a satire manner, and shouldn't be taken seriously. Boon surely showed his skills as an actor and as a troll in this one.

As reported on the official Mortal Kombat Facebook Page, there is yet another update coming to Mortal Kombat X Mobile, this time it's a special Halloween update, for which you can get a sneak peak for in the upcoming Kombat Kast. Tune in to the official NetherRealm Studios Twitch Channel this Monday, October 15th, at 3:00 PM CDT (8:00 PM UTC), to see it all. 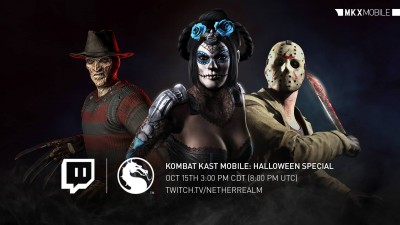 What Ed Boon Meant By "Exactly"?

After months of no clues regarding the next game from NetherRealm Studios, we might have finally got one. Ed Boon has Tweeted this Tweet below, in response to another Tweet from the YouTuber Marques Brownlee regarding a possibility of a product being announced without being "leaked everywhere" before release, to which Boon replied with only one word: Exactly.

It's not clear what Boon meant by that, but this might be another clue regarding the new game from NRS. As you might know, the Injustice 2 Pro Series Finals isn't far from now, as it is going to take place on November 13. That sounds like an ideal time to announce a new game, and it might very well happen, all things considered.