As the Fighter Pack 1 for Injustice 2 is close to it's end with the Starfire trailer that was revealed at SDCC, the speculations regarding the future DLC characters for the game have only been increased, as it has started way before the Starfire trailer, and all of the speculation includes the question if another Mortal Kombat character will join Sub-Zero in the battle with the DC characters, and if so, which one?

MK Co-Creator and head of NetherRealm Studios Ed Boon has threw some more logs to the fire, as he sent this Tweet with a link to an article that reveals that the upcoming DC movie, Black Lightning, has added to it's cast non other then James Remar, who portrayed Raiden in the 2nd MK movie, Mortal Kombat: Annihilation.

Ed Boon is known for his trolling teases, but almost all of them have lead to something, and this could lead to the official confirmation of Raiden as a 2nd Mortal Kombat character in Injustice 2. We will see.

Storm Collectibles, a company with a history of making great fighting game related action figures, have delivered once again, as they reveled their San Diego Comic Con 2017 exclusive figures. One is of Ryu from Street Fighter, and the other one is of the mysterious shadow ninja of Mortal Kombat and the original Sub-Zero, Bi-Han, AKA Noob Saibot.

The figure is as 7″ inch and it comes with replicated detail, interchangeable hands, faces and a weapon and will cost 49.99$, and it will be sold only at this year's San Diego Comic Con. So if you are going to SDCC this year, check out Storm's booth to get a closer look, and maybe get your own copy of Noob Saibot.

Here is a sneak peak of the Noob Saibot action figure below: 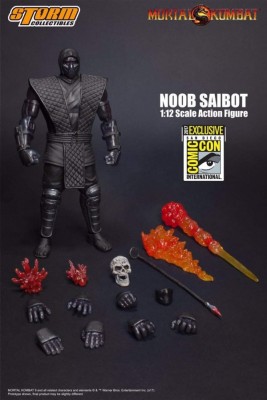 The Mortal Kombat references and easter eggs in Injustice 2 are just keep coming, and if you saw the Injustice 2 Sub-Zero Watch Tower stream from NetherRealm Studios Twitch channel, you already saw a glimpse of the following easter egg.

It turns out that Sub-Zero can change the appearance of his Ice Klone by using specific Gear pieces from the game's Gear System, this special versions of the Ice Klone aren't only unique, but they are a direct references to some finishing moves from Mortal Kombat 3 Vanilla, Ultimate Mortal Kombat 3 and Mortal Kombat Trilogy. To be more specific, these are easter eggs of Animalities and Friendships from these games.

Here is a video from the YouTuber named SinX6, that showcases all of the new versions of the Ice Klone:

Here is another video from the YouTuber named Royal T, who shows which Gear piece you need to get the Penguin version of the Ice Klone, which is the Falling Avalanche Blades weapon piece:

As you might remember, Sub-Zero is coming to Injustice 2 next week on July 11th, and of course there is a Watch Tower stream coming for our beloved blue ice Ninja. Check Netherrealm Studios' Twitch Channel at 1PM PST / 3PM CDT / 4PM EDT to see it all.

Also, check out this Tweet from the Injustice 2 official Twitter page to see a little preview to get wormed up, to get cool down, your choice.