Injustice 2 has been released just last week, yet there are already signs of the easter eggs that NetherRealm Studios are known for in this game, and these ones in particular are of the main franchise of NetherRealm Studios, which is of course, Mortal Kombat. All of the videos below are curtsy of the YouTuber named MKIceAndFire.

The first one is a Raiden easter egg, through a Clash dialog between Black Adam and the Joker.

The next one is a reference to the iconic "Finish Him" phrase from the Mortal Kombat games. As you kick the opponent into the theater sign, you will notice that more and more letters will drop from it with each hit, until only the letters that create the "Finish Him" phrase will be shown there in the right order.

The final one is from Catwoman using the code LK4D4, the very same Cyborg code for Cyrax from Mortal Kombat.

NOTE: This easter egg contains spoilers for the Injustice 2 Story Mode, don't watch it if you don't wanna get spoiled.

The Injustice YouTube Channel has posted the reveal video for the first wave of DLC Characters for Injustice 2, the next fighting game from Netherrealm Studios. And as we all expected, one of these characters is non-other then Sub-Zero, who makes it to the wave along with DC fan favorites, Starfire and the Red Hood.

Also, there are silhouettes who can be seen in the background, and if you look at the right corner, you can see a silhouette resembling the MK Thunder God, Raiden. This can possibly mean that Raiden is a future DLC character for Injustice 2.

All of the DLC characters will be available for anyone who pre-order the Ultimate Edition of Injustice 2, along with Darkseid (who is a pre-order bonus, similar to Goro in Mortal Kombat XL) and 6 more DLC characters that are yet to be officially revealed. So if you wanna get your hands on Sub-Zero for Injustice 2, don't forget to get pre-order your copy.

[UPDATE]
MK Co-Creator and head of Netherrealm Studios Ed Boon just tweeted the picture of the first DLC wave for Injustice 2, only that now the image has been edited. Now the silhouettes have been rearranged and there is no silhouette with a rice farmer hat resembling Raiden. Could this mean that Raiden has been dis-confirmed for Injustice 2? Only time will tell. 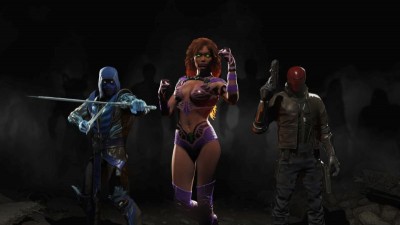