As 2017 ends and 2018 has just begun, a YouTube channel named First to 10 has uploaded this video below, featuring players, Youtubers and commentators from across the world in the NetherRealm Studios community saying "thank you" to the development company who made the Fighting Game franchises we all love and play.

Author's opinion: I myself would love to say "thank you" to NetherRealm Studios for making the best and greatest Fighting Game franchise of all time, Mortal Kombat, that gave me a lot of great memories since my childhood, as well as for both Reptile and Scorpion, my top 2 all time favorite characters (Reptile at No. 1, and Scorpion at No. 2), and also thank you for Injustice, and putting the Teenage Mutant Ninja Turtles in Injustice 2.

And of course in the spirit of a brand new year, to everyone in NetherRealm Studios and the community, happy new year with fighting and violence to all

A couple of days ago, NetherRealm Studios released a patch for Injustice 2. In this patch, one line in particular is referring to the Mortal Kombat Thunder God Raiden, stating that "AI controlled Raiden can now perform all end of round animations". It has been now revealed that Raiden recevied a secret winning pose. If an AI Raiden wins the first round in a match, he can randomly go to the secret winning pose, in which he summons Kidd Thunder, Raiden's little friend who was in Raiden's Friendship Finishing Move in Mortal Kombat II and Mortal Kombat Trilogy. 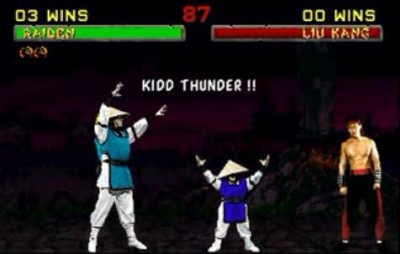 Here is a video from my channel, it took my AI Raiden several tries before I finally got it. Enjoy.

A long time ago, the work on a Mortal Kombat Lore Encyclopedia has begun, and right now it looks more ready then ever. As you can look at this Tweet from the Kombat Encyclopedia Twitter page, were the book seems ready to go to stores and the hands of old and new fans alike.

But that's not all, the YouTuber unCAGEDgamez got this currently unofficial piece of work sent to him by mail, and we get an even bigger peak at the book and it's contains, and from that peek alone it already looks amazing.

If you want this book to get an official release all you have to do is sign this petition right here, and show your support for this welcomed and appreciated project made all in passion for the Mortal Kombat series.