Across the history of the early Mortal Kombat games, which are of course Mortal Kombat 1 to Mortal Kombat Trilogy, one thing that was in common with all of them was the menacing announcer, who was heard in every match with the iconic lines such as "FIGHT!" and "FINISH HIM!", and was also the voice of Shao Kahn in the games after MK1. That voice was of none other then Steve Richie, an acclaimed Pinball and video game designer who worked at the same building that Ed Boon and John Tobias were working on the Mortal Kombat games at, and was asked by them to record these lines for the MK games, from MK2 to MKT, as well as Mortal Kombat: Shaolin Monks. Richie was also the man who suggested to change the "C" in the term "Combat" to "K", which lead to the creation of the name Mortal Kombat.

Great Big Story has conducted an interview with Richie. In this interview, he talks about his work on the MK games, his work on Pinball machines and more. You can watch the interview right here below:

As if you might remember, Sub-Zero in Injustice 2 has several version of his Ice Klone that can be chosen depending on the Gear you have, all of which are Easter Eggs and references to Mortal Kombat. I just got Sub-Zero's Mortal Kombat [/b ]Winning Pose Ice Klone in [b]Injustice 2, and I'm going to show the Epic Gear pieces you need to get this kool (no pun intended) version of the Klone. You need the following Epic pieces:

So get these Epic Gear pieces and you will get the Mortal Kombat Winning Pose Ice Klone!

Here is a video from my channel, showcasing the Winning Pose Ice Klone and Epic Gear Pieces.

As of right now, for a short time until all gone, they're 8X10's of all of the Mortal Kombat characters that were portrayed in the first 4 games by Richard Divizio, and are signed by Divizio himself!

Divizio was the actor who portrayed Kano, Baraka, Kabal and Quan Chi in the first 4 games (Mortal Kombat 1 to Mortal Kombat Gold). Here is a direct quote as well as a Tweet from him below:

"Hello to all my Mortal Kombat fans!!
Most of you know, I play Kano, Baraka, Kabal and Quan Chi in the history making video game Mortal Kombat!
Though Mortal Kombat is over 25 years old, the other actors who played various characters and I have recently found out that there is a worldwide cult following still to this day.
The other actors and myself have now been invited to various Comic Cons, Gaming Conventions and Cosplay Events and it's been our pleasure to meet all of you, that have made this game still the number 1 fighting game of all time!
I get many emails on a daily basis asking if I have autographs to sign, and for awhile I did not. But recently, I found a hidden stash of my 8x10's and thought I might let ya know about my find, and make them available on Ebay for a short time until they are gone.

Thank you all again for being the best fans ever!!!!

Check for my other Character Autographs as well. Kano, Baraka or Quan Chi" 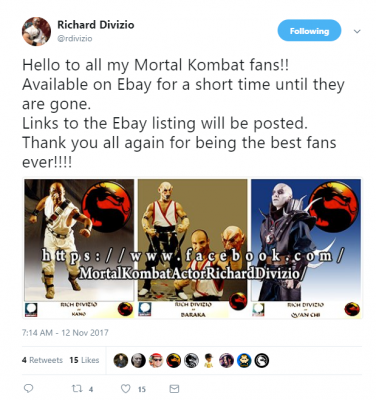 Here are also links along with pics for the 8X10's. So go and get them before they are all gone! 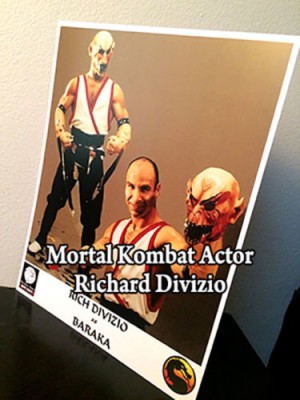 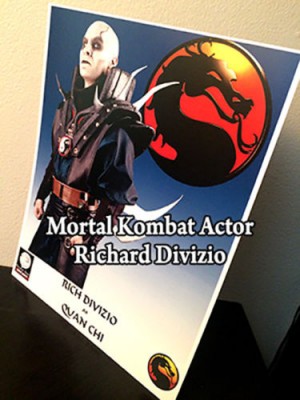 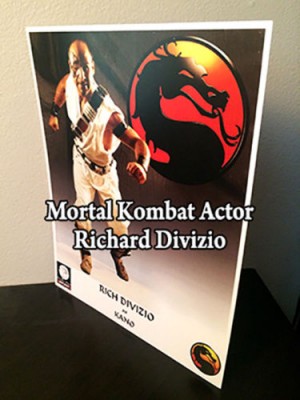