As some of you might know, last Saturday was the finals of the Season 2 of the Mortal Kombat X ESL League.

During the broadcast, a new Kombat Kast was shown. This Kombat Kast featured the most generally hyped character for Kombat Pack 2, the combination of all of the Ninja Cybrogs, none other then Triborg.

If you would like to see the Kombat Kast, featuring Tyler Landsdown, Derek Kirtzic and others, here is the link for the entire stream of the Mortal Kombat X ESL Season 2 finals. The Kombat Kast starts at the 07:17:00 mark, with the Belt match between the hosts starting at the 08:06:40 mark:

Of course you can watch all the other matches from the event between some the greatest MK players from around the world. As someone who watched the whole thing, my advice to you is to go and watch at least some of the matches, it was an amazing show.

Today, Warner Bros. Interactive Entertainment revealed a closer look at the brand-new characters and content coming to Mortal Kombat X in Kombat Pack 2, the game’s next wave of downloadable content. The Mortal Kombat X Kombat Pack 2 Gameplay Trailer showcases the Kombatants being introduced to the game’s playable roster in 2016 including the Xenomorph from Alien, Leatherface, Triborg and Bo' Rai Cho:

Players who purchase Kombat Pack 2 will also receive the never-before-released Apocalypse Pack, as well as the following content for Mortal Kombat X: 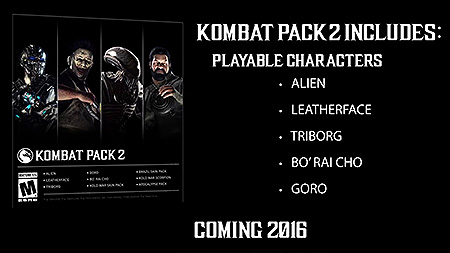 There are several things worth mentioning about the trailer. The new characters look amazing and seem to offer really interesting gameplay. Netherrealm Studios have definitely payed attention to details and added some really cool things:

- Xenomorph looks a little bit like Baraka and also plays like him. Remember the first trailer, where he came out of him?
- Triborg is amazing. The only question is who is the third cyborg, Smoke does not exist in robot form in this timeline.
- Bo' Rai Cho is fighting on The Pit. WHAT?!?!?! Well, based on this trailer, we are getting classic arena(s).
- The Pit has a man on fire in the background.

Take a look at some screencaptures from the trailer:

Did you notice something we didn't? Let us know in the comments.