Netherrealm Studios has announced that the entire Kombat Pack 2 will be released on March 1st, 2016. The release date of the pack is the same as the release date of Mortal Kombat XL. If you pre-order it you will also get the Cassie Cage and Jacqui Briggs Cosplay skins for free: 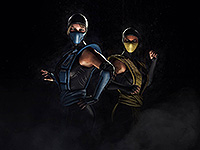 The fact that the Cosplay Skins are not listed as included in Mortal Kombat XL even though this game is supposed to contain all DLC content, makes us wonder. Is more DLC content coming our way after the release of Mortal Kombat XL and Kombat Pack 2? Tell us what you think in the comments.

The recently released Triborg Kombat Kast contained a surprise for the fans of Mortal Kombat X. After the Sektor, Cyrax and Smoke variations of the new cyber ninja were shown, another yet unannounced cyborg was also shown: 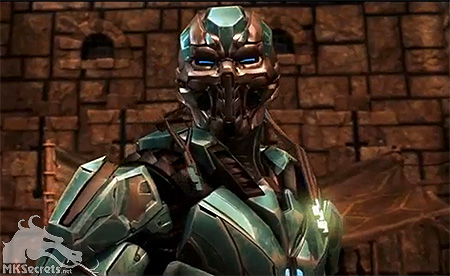 During the short presentation the name of the Triborg variation is Cyber Sub-Zero. So, it would seem that Triborg is going to have a fourth variation based on Mortal Kombat 9 (2011)'s Cyber Sub-Zero character. You can see him at 07:55:00:

Mortal Kombat XL Announced For PS4 & XBox One. No PC

Netherrealm Studios and Warner Bros have announced Mortal Kombat XL for PlayStation 4 and XBox One. This version of the game will include all DLC content, including the 9 DLC characters, all released skins and the new classic arena The Pit. Take a look at the announcement trailer:

Netherrealm Studios also announced that neither Kombat Pack 2 nor Mortal Kombat XL will be released for PC.

Take a look at the cover art for the new version of Mortal Kombat X:

Netherrealm Studios also released a price listing to help fens decide what they need to buy: 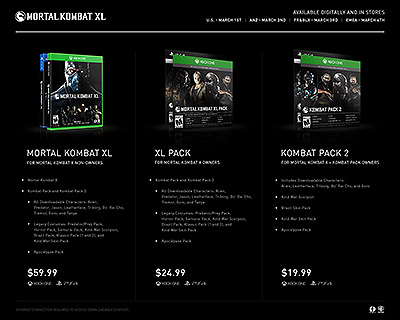 If you are interested at pre-ordering Mortal Kombat XL you can do it using the link below:

Mortal Kombat X - Chasing the Cup on the CW Network

by Roy Arkon on Jan 31, 2016 :: 0
THE CW, MACHINIMA
AND WARNER BROS. INTERACTIVE ENTERTAINMENT
PARTNER TO BRING THE THIRD SEASON OF MACHINIMA’S
E-SPORTS DOCUSERIES
“CHASING THE CUP” TO CW SEED AND THE CW NETWORK 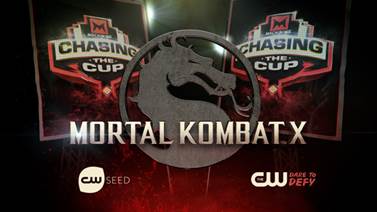 January 25, 2016 (Burbank, CA) – The CW, in partnership with Machinima and Warner Bros. Interactive Entertainment (WBIE), have announced that the third season of Machinima’s popular digital series, CHASING THE CUP, will now have a new home. The first three episodes of the five-episode digital series, MORTAL KOMBAT X: MACHINIMA’S CHASING THE CUP, launch today on CW Seed, with upcoming episodes to post weekly. The finale will air on The CW Network as a one-hour primetime special on Monday, Feb. 15 (8:00-9:00pm ET/PT).

MORTAL KOMBAT X: MACHINIMA’S CHASING THE CUP follows five of the world’s top-ranked players of the acclaimed fighting game Mortal Kombat X, vying to achieve their dream of being crowned the best in the world at the ESL Mortal Kombat X Pro League Finals. Viewers will be given a behind-the-scenes look at the passion, dedication, skill, and sacrifice required to be among the best esports competitors in the world.

The second season of the ESL Mortal Kombat X Pro League began Nov. 1, 2015, and saw competitors from Europe and North America battle it out for their chance to win a piece of the $100,000 prize pool, and the title of World Champion. The final ESL Mortal Kombat X Season 2 Finals tournament took place at the ESL Burbank Studios on Jan. 24.

Mortal Kombat X is the most recent installment in its legendary, critically acclaimed fighting game franchise. Published by WBIE and developed by NetherRealm Studios, the game combines a cinematic presentation with all new gameplay to deliver the most brutal Kombat experience ever. Players step into an original story showcasing some of the game’s most prolific characters including Scorpion and Sub-Zero, while introducing new challengers that represent the forces of good and evil and tie the tale together.

ABOUT CHASING THE CUP

Machinima’s Chasing the Cup is a docu-series that follows dominant professional esports competitors in major tournaments. The series follows these athletes and personalities as they make personal sacrifices while they compete for the title and the right to be called the best players in the world.

Machinima is the most notorious purveyor and cultivator of fandom and gamer culture. The FIRST! Many2Many programing service (M2M), we create, curate and celebrate the best fandom and gamer content across multiple video platforms. As one of the largest online video platforms in the world, Machinima programs to a community passionate about video games, animation, movies, TV, and the other endless forms of pop culture. With a focus on scripted, topical and gaming programing, and a talent network of thousands of programmers, Machinima reaches over 170M viewers each month.

ABOUT CW SEEDCW Seed (http://www.cwseed.com) launched in 2013 as the digital-only studio of The CW Television Network, and is The CW's home for high-quality original digital series as well as streaming library content of fan-favorite television series. CW Seed features original digital series including the animated VIXEN, from DC Entertainment; the “Veronica Mars” spin-off, PLAY IT AGAIN, DICK; VERY MALLORY; and THE P.E.T. SQUAD FILES, as well as every episode of classic T.V. series including THE O.C., THE BEN STILLER SHOW, and MAD TV. Follow CW Seed on twitter at @cwseed.

ESL is the world's largest esports company, leading the industry across the world's most popular video games with numerous online and offline competitions. It operates high profile, branded international and national leagues and tournaments such as the Intel® Extreme Masters, ESL One, ESL National Championships and other top tier stadium based events, as well as grassroots amateur cups, leagues and matchmaking systems. ESL covers a broad field of services in gaming technology, event management, advertising and television production, fully catering to the needs of the esports ecosystem. With offices in North America, Germany, Russia, France, Poland, Spain, China, and partners in many other countries, it has a truly global footprint. http://www.eslgaming.com

Warner Bros. Interactive Entertainment, a division of Warner Bros. Home Entertainment, Inc., is a premier worldwide publisher, developer, licensor and distributor of entertainment content for the interactive space across all platforms, including console, handheld, mobile and PC-based gaming for both internal and third party game titles.

Great things are coming to Mortal Kombat X in the near future. Next to the 4 all new characters, the new skins and the classic arena The Pit, Netherrealm Studio is completely changing the net code of the game to give fans a more fluid, lag free and overall better experience while playing online. Take a look at the official information video:

You can sign up for the beta testing on beta.mortalkombat.com. To sign up you need to have played Mortal Kombat X Online for at least one hour.