The Mortal Kombat X comic book doesn't keep surprising its fans and its creators. It was recently announced that the first printed issue was completely sold out and a reprint was ordered. But what we are going to focus on in this news is its fifth digital chapter which features the long awaited return of the female assassin and member of the Black Dragon Tasia:

Even some of the hard core and long time Mortal Kombat fans might have a problem remembering who Tasia is, so lets take a closer look at her story:

Tasia is a member of the Black Dragon clan and has so far appeared in only one and unfortunately the worst game of the Mortal Kombat franchise, Mortal Kombat: Special Forces: 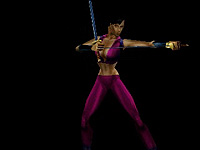 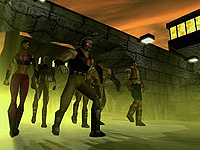 There she escaped together with Kano from a Special Forces prison only to later be stopped/killed by Jax. The game does not provide a story for her. Here are two videos in which the character was featured:

The character was also featured in episode 6 of The History of Mortal Kombat:

Whether her appearance in the comic books is only a cameo, we will have to wait and find out. We certainly hope to see some development of the character and probably some role in the Mortal Kombat X game. For now it is nice to see all these characters coming back to life and we strongly suggest you pick a copy of the Mortal Kombat X comic book if you consider yourself a hard core fan of the franchise.

Were you surprised to see Tasia? Tell us what you think of her return.

In the fifth digital chapter of the Mortal Kombat X comic book Sonya Blade is facing off against Kotal Kahn while her daughter Cassie Cage is locked in a death match with Frost. Both battles are interrupted by an unexpected visitors and fate takes Cassie Cage and Jaqcui Briggs to a new adventure:

Cassie Cage must take down a surprise (and deadly) opponent--Frost! Meanwhile, Sonya's "discussions" with Kotal Kahn take an unexpected turn...

Now lets take a look at several preview pages from the chapter: 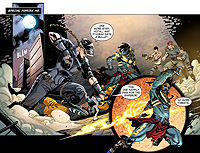 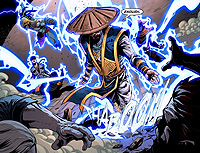 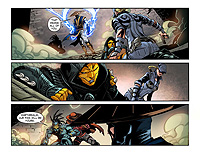 In addition to this a description about the upcoming chapter six and a cover art is now available: