The On Blast Show with Larnell Stovall and Eric Jacobus

The people behind the The On Blast Show simply can't stop surprising us with the people who they manage to get on the show. The guest of episode 29 was the stunt and fighting choreographer of Mortal Kombat: Legacy Larnell Stovall. For those of you, who were unable to watch the show, here you can catch up:

For the 30th episode of the show, another Mortal Kombat: Legacy related guest has already been announced, Eric Jacobus, the actor who portrays Kurtis Stryker in the second episode of the series. The episode will be broadcasted today (Thuesday) at 10:00pm Est.

A lot of famous people from the Mortal Kombat universe have been guests on The On Blast Show, including John Tobias and Daniel Pessina. If you are interested in watching some of the older episodes, visit the official YouTube channel of the show.

Just like we promised yesterday, chapter 9 of Mortal Kombat (2011) Story Mode is now available for streaming and downloading:

Check back soon for the next chapter.

The 8th Chapter of Mortal Kombat (2011) Story Mode is now available for streaming and downloading:

A new chapter will be released tomorrow, so be sure to stop by.

DC Comics has just announced that in addition to the previously announced Collector's Edition a special limited Battle Edition of Injustice: Gods Among Us will also be released:

Warner Bros. Interactive Entertainment and DC Entertainment today revealed details for the Injustice: Gods Among Us Battle Edition. The package will be available in limited quantities at Gamestop and EB Games stores located in the United States and Canada for Xbox 360® video game and entertainment system from Microsoft and PlayStation®3 computer entertainment system. Injustice: Gods Among Us Battle Edition is also confirmed to be available in North America beginning April 16 for Xbox 360, PS3 and the Wii U™ system from Nintendo.

The Injustice: Gods Among Us Battle Edition will retail for $149.99 and includes the game disc, exclusive Injustice: Gods Among Us Fight Stick featuring official artwork from the game and three exclusive skins based on Batman, Superman and Wonder Woman from DC COMICS – THE NEW 52. The Fight Stick is a light weight controller that boasts a non-skid foam underside, a lockout feature for the Start, Select and Guide buttons, as well as adjustable illumination for the buttons and joystick.

The United States version of the Injustice: Gods Among Us Collector’s Edition will include:
- Exclusive DC Collectibles statue featuring iconic characters Batman and Wonder Woman, the Fortress of Solitude, and the Last Son of Krypton’s escape ship
- Special Collector's Edition of the Injustice: Gods Among Us comic book
- Digital download of DC Universe animated film Justice League: Doom
- Three exclusive skins based on Batman, Superman and Wonder Woman from DC COMICS – THE NEW 52

Injustice: Gods Among Us Story and Comic Book Prequel News

Don't really want to spoil this for you, so I will try not to let anything slip through the words. If you are however worried, just skip this paragraph. The first digital chapter is simply amazing, well written and skillfully illustrated. The 20 digital pages (1 digital page takes about half printed page) take you from present day Gotham to the recent past (5 years to be exact) where Superman receives the happiest news of his life. The happy moments that dominate this first chapter are however only a preparation of what happens on the last few pages. I recommend this first chapter even for the non comic book fans.

The first chapter is available for purchase on website such as ComiXology for $0.99.

In an interview for IGN comic book writer Tom Taylor explained how amazed he was by the story of the game:

To tell you the truth, when the script arrived, I rolled my eyes, gritted my teeth and prepared to read through what I assumed would be a standard script to a fighting game; some ham-fisted dialogue, followed by some flaky reason to want to take out the opponents ribs one at a time. 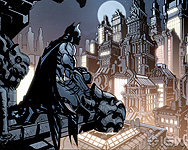 And then I started reading it… and I read the entire thing in one sitting… and then I grinned. This really is the most ambitious script I’ve ever seen from a fighting game, and the NetherRealm guys have pulled it off. So, the challenge is not ‘how do I make this interesting?’ but how do I complement what these guys have done? How do I too find that perfect balance between emotional, epic storytelling and sudden, irreparable spine removal?

He goes however beyond that and shares some story details, explaining how ambitious the whole story is:

Taylor: Glad to hear you liked it. I’ve actually been pouring my heart and soul into this one. Superman has been my absolute hero for as long as I can remember and, for reasons that will become obvious, this has been a very hard one to write from that point of view.

Yes, it has been freeing. Probably the most freeing thing I’ve ever worked on in licensed comics. There has been nothing off the table with this series. Everything you read will be how I wrote it. 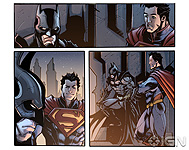 If you’ve read the first chapter, you know what happens on the last page. And everyone will have a chance to download the first ten-page chapter on January 15. I wrote that fully expecting a conversation would be coming with my editors but no one batted an eyelid.

Wait until page 9 of Chapter 3 (the second-to-last page of the first print comic), then it will become clear just how far we’re going. Nothing and no one is safe or sacred in our series.

And last but not least, DC Comics has released the cover art of the forth print issue of the prequel comic book. The issue will be released on Apr 24 2013.

Click here to learn more about the upcoming comic book series based on Injustice: Gods Among Us.