Previously on Injustice: Gods Among Us

Netherrealm Studios newest game Injustice: Gods Among Us has been absent from our headlines for a little while and it is time to do a little catching up.

Netherrealm Studios has released a second trailer for the game, entitled A New Regime. The trailer Explains part of the events which lead to the game:

An additional image was posted on the Facebook page of the game: 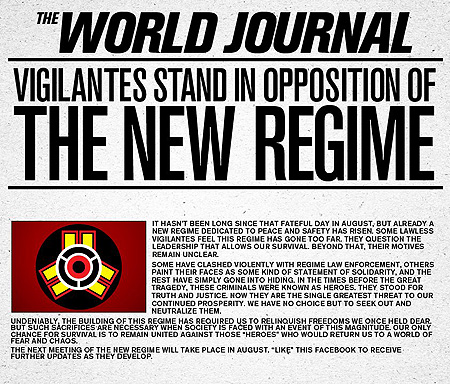 Injustice: Gods Among Us was present at this years Electronic Entertainment Expo where it won the Best Critics Award Creative director Ed Boon payed GameSpot a visit and revealed some details:

So, what do you guys think of the new game and the already revealed story threads?

And the Supreme Champion of Mortal Kombat is once again Perfect Legend. Congratulations for winning the Evolution tournament two times in a row.

Did you miss the finals, we have embedded the recorded live stream below:

The sixth volume of Mortal Kombat Haziness has arrived:

Want to download these videos, visit the official page of the series.

Let us know what you guys think.

As the founder of MKSecrets I thought a lot whether I should make a statement about the whole unused sprites situation and the conflict between MKSecrets represented by ded and several people from the MUGEN Community. Fact is, I cannot stand idly by when someone attacks MKSecrets and the Mortal Kombat community and not having the courage to leave the posts online when things got ugly. The whole situation is unpleasant for me and I am sure that something like this is the last thing you want to read on our Facebook page or our front page for that matter, for which I apologize to all of you. MKSecrets is about information, about secrets, about all things Mortal Kombat, but most of all it is about quality and our work on the site, the History and the Haziness Series has proved that. Proper credit for the sprites was given to the person who ripped them. The reaction of several people from the MUGEN board came as a complete shock to me. They started attacking the site, its fans and basically every MK Fan who does not care about MUGEN and this is something ded and I as well will not tolerate. However the reaction of both sides was in one way or another completely childish. There is one last thing I want to say to all the people from both sides. It is clear that both communities are completely dysfunctional and closed to the rest of the world and even have inside problems. Actually one of the reasons I usually stay aside. Now, if any one has a problem with the way the sprites were used or things that they deserve a credit for whatever reason, feel free to send me an E-Mail. Just make sure you really deserve it.


The Making of Goro

studioADI, one of the special effects studios that worked on the original Mortal Kombat movie released a documentary video about the making of the four armed Shokan Prince, Goro:

The mighty Goro from MORTAL KOMBAT in all his animatronic glory! State of the art in 1995 meant heavy electric motors to drive Goro's upper arms, controlled by a telemetry suit feeding info through an umbilical into the 120-pound hero animatronic suit and early lip synch playback to pre-recorded dialogue. Also some quick cuts of the incredibly patient Martial Arts Trainer and Stunt Coordinator, Pat Johnson, who had worked with such icons as Bruce Lee and Steve McQueen.

Mortal Kombat: The Movie was features in episode four of our own The History of Mortal Kombat Series: