The History of Mortal Kombat - Ep. 05 - Darkness Is Calling

The fifth episode of our Mortal Kombat History Series, entitled Darkness Is Calling has arrived. And believe it or not it is once again longer than the previous. A great amount of work has been put in this episode and we really hope you guys will love it:

Are you ready for some Mortal Kombat 9 action in an old school outfit? The PSVita version of the game has what you want. Check out this brand new trailer:

A new Fight Anywhere Live Action Trailer for the PSVita version of Mortal Kombat 9 has been released. This time the trailer features both Kitana and Mileena:

Click on the image below to watch the trailer:

Thanks to our site member barrymatharoo for the heads-up on this update.

Exactly one year has passed since the release of Mortal Kombat 9 for PlayStation 3 and XBox 360. For this anniversary series co-creator Ed Boon released two of the unused kovers for the game: 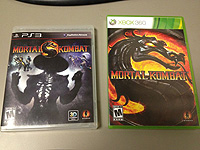 A new live action teaser trailer, this time featuring Mileena, for the PSVita version of Mortal Kombat 9 has been released:

Click on the image below to watch the trailer:

Thanks to our site member barrymatharoo for the heads-up on this update.