The people at Netherrealm Studios have been busy preparing for yet another DLC character release, Kenshi. The Official Mortal Kombat Website has been updated with information about the character, including images and biography. Additionally Skarlet's Fatality Wallpaper has been released:

Biography: For years the swordsman Kenshi traveled the world in search of worthy opponents. When a mysterious elderly man named Song offered to show him the location of Sento, an ancient sword worthy of his abilities, Kenshisuccumbed to pride. He followed Song to a tomb wherein lay the Well of Souls. When Kenshi retrieved the sword, spirits of ancient warriors spewed forth, blinding him. Song then revealed himself to be Shang Tsung. He consumed thesouls, leaving Kenshi in the dark labyrinth to die. But Sento called to Kenshi. It led him out of the tomb and revealed his lost heritage as a descendant of the warriors who had been buried there. Kenshi vowed to slay Shang Tsung and free the souls of his ancestors.

We have already updated our Mortal Kombat 9 (2011) section which now includes Kenshi's bio.

Skarlet isn't even cold yet and Netherrealm Studios released the trailer for the second DLC Kharacter, the swordsman, who originally appeared in Mortal Kombat: Deadly Alliance, Kenshi. He will be released on July 5th: 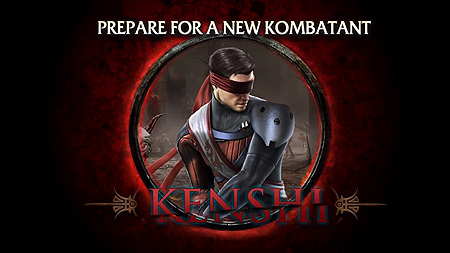 How to: Fix De-Sync on XBox360 with Klassic Kharacter Skins

Netherrealm Studios just published a fix to deal with the online de-sync issues with the Klassic Kostumes on XBox 360. Follow these few steps:

The steps to redownload the retro skins are as follows:
1. Hit the guide button (XBox Logo button on controller)
2. Go to the right to the tab labelled "Settings"
3. Select "Account Management"
4. Select "Download History"
5. Select the pre-order DLC you wish to re-download.
6. Choose "download again"

Repeat this for each skin that you have downloaded. Fix is still in the works for PS3.

Despite the announcement that Skarlet would be released in Europe on June 22nd, a technical issue prevented this to happen on the PlayStation Network. To make fans even more mad and dissapointed, WB Games UK listed the Klassic Skins DLC Pack with a price that was twice as much as the announced. To address these problems and to calm down the fans, WB Games UK tweeted the following announcements:

Due to technical issues, Skarlet DLC will not be available to PSN users in Europe until next week. We apologise for any inconvenience.

The posted price of the MK Classic Skins pack on PSN is incorrect and being rectified to £3.19 for UK users and €3.99 for European users.

The Mortal Kombat Klassic Skins pack is now priced correctly at £3.19/€3.99 and equivalent on the SCEE PlayStation Store.

Each DLC Kharacter will come with 2 Klassic Kostumes. The first two have also been announced and they are for Noob Saibot and Smoke. Take a look at the pictures:

We have also updated our Mortal Kombat 9 Bios, Endings and Special Moves and Finishers Guide. All of these pages now include information about Skarlet.

Thanks to our site member Tiago7 for the heads-up on this story.