Kollectors and Tournament Edition Images
by Gambid on Dec 14, 2010 :: 2 Comments

As we already mentioned in the previous new, there will be three different editions of Mortal Kombat 2011: Standard, Kollectors and Tournament. Here is once again their description:

And guess what, now we can show you these versions: 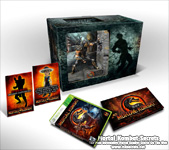 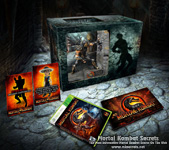 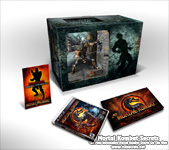 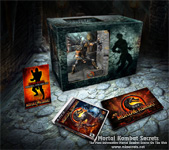 Take a look at the previous news from more exciting information.

Today it was revealed that three different version of Mortal Kombat (2011) will be available for purchase. In additions three online stores will have special offers with codes for downloading classic skins for Scorpion, Sub-Zero and Reptile. Mortal Kombat Secrets has also received an extended version of the Kratos Reveal Trailer. From the pres release:

Launching in April 2011 and developed by NetherRealm Studios, Mortal Kombat is available for pre-order now on both the PS3 and Xbox 360® video game and entertainment system from Microsoft. The game will be available to consumers in three editions– Standard Edition, Kollector’s Edition and Tournament Edition.

Players will be able to pre-order any of the above at North American retailers as of today. Specific pre-order programs include:

Mortal Kombat will feature Kratos as a playable character, as well as be in Stereoscopic 3-D exclusively in the PS3 version. The brutal warrior from the acclaimed God of War franchise will have his own customized move set, fatality, and fighting arena, available to all original purchasers when Mortal Kombat hits stores.

The newest chapter of the iconic fighting franchise marks a triumphant return to the series’ mature presentation and a reinvention of its classic 2-D fighting mechanic. In addition, Mortal Kombat introduces a number of new game-play features including tag team and a deeper story mode. Players can choose from an extensive lineup of the game’s renowned warriors and challenge their friends in traditional 1 vs. 1 matches or take on several new game modes.

Click on the image below to watch the extended Kratos Reveal Trailer in our videos section: 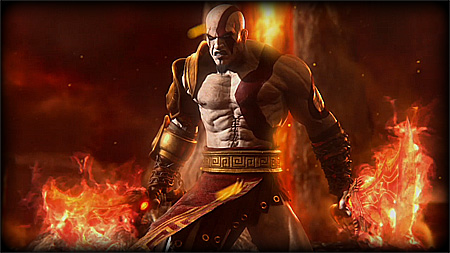 Amazon.Com published a render of the Klassic Reptile skin.

As you know, we are Amazon.Com associate and pre-ordering the game through our Online Store will also give you the Klassik Reptile bonus. So if you plan to buy the game, buy it through our site and support Mortal Kombat Secrets. Here are the direct links to the PlayStation 3 and the XBox 360 versions.

It looks like today is the day that is all about characters confirmation. Game Trailers have just published a Mortal Kombat Teaser video from the Spike TV Video Game Awards 2010 (12.11.2010):

The Video is no longer available.

Thanks to our forum member mkkevin for the heads-up on this story.

StickSkills announced yesterday that Kratos from the PlayStation 3 exclusive God Of War-Sereas will be guest starring in the Play Station 3-version of the new Mortal Kombat.

Please note: this image is not from the new Mortal Kombat game.

Mortal Kombat has seen quite a few changes, mishaps, and styles over the long history of the franchise. After a not so well received Mortal Kombat vs DC Universe hit the market, Ed Boon and the Mortal Kombat franchise are looking to rebound with an exclusive character on at least one of the consoles.

Thanks to the January issue of the Official Playstation Magazine, we've learned just who that character is. When Mortal Kombat drops next year in March, Playstation 3 owners will be able to use an exclusive character none other than Kratos himself from the God of War series. Not only will Kratos be featured in the game, he'll have his own fatalities, combat moves, and his very own God of War themed combat arena.

While Kratos will be featured in the game, he won't be a playable character in the story mode. We're rather happy to see Kratos make his entry into the Mortal Kombat series, as he's known as one of the more iconic members of the Playstation 3 family and he loves violence.

David Jaffe, the lead designer of God of War also confirmed the information on his Twitter page.

Thanks to Jason Leyanna for this news.

Mortal Kombat Details Leak On The Official Website
by Gambid on Dec 8, 2010 :: 0 Comments

It is incredible what can happen on the other side of the world while you are sleeping. When I woke up this morning our Inbox was full of E-Mails from you, our visitors, informing us about a major leak of information on the Official Mortal Kombat Website. Thank you for the heads-up.

Apparently someone looked through unprotected directories as this was previously possible and discovered more than 40 audio files with background soundtracks, different announcements, characters speech and game modes. The files reveal unannounced characters, arenas and game modes. We cannot be sure that the characters will be playable by only having seen the files, but chances do look good.

The rest of this news is going to be written in black, because there might be some of you who do not wish to know who/what these unannounced characters/arenas/game modes are, before they are officially announced by the studio:

Highlight to read the rest of the news (SPOILER WARNING):

Thanks to Jason Leyanna, JaDe_88, MKManiak and all the others for the heads-up on this story and the sound files of course.