Part 4 of the second episode of the second season of MKast has been released. In this episode Senior Producer Hans Lo and Producer Hector Sanchez are joined by Lead Designer John Edwards, Paulo Garcia and Designer Brian LeBaron to discuss the next Mortal Kombat game. In this fourth part you will get information about the enhanced special moves.

The latest issue of the polish magazine PSX Extreme contains an article about the new Mortal Kombat with some exclusive screenshots that confirm that Sindel will be part of the roster of the new game. Below you can see the two covers of the magazine:

After the unexpected and not advertised release of Ultimate Mortal Kombat 3 for Java capable phones on December 1st, the game was released in exactly the same way for Apple IPhone, IPad and IPod Touch. The game offers 9 playable characters (Sub-Zero, Scorpion, Kitana, Nightwolf, Jax, Sheeva, Sonya, Liu Kang and Stryker), 2 hidden, playable characters (Ermac and Jade) and two bosses (Shao Kahn and Motaro). In terms of arenas, the game has 10 of them. The graphics have been completely redone and the game uses 3D models for the fighters and the backgrounds and new visual effects. The quality of the new graphics and the entire game is questionable as is shown by the first user comments and the first reviews that appeared online and state that the game feels extremely rushed and contains a lot of bugs.

We took a look inside the assets of the game and found something really interesting. Classic Sub-Zero, Cyrax, Kano, Kabal, Kung Lao, Mileena, Noob Saibot, Reptile, Sektor, Shang Tsung, Sindel, Human Smoke and Smoke are not part of the game. However their Versus Poses and icons are still in the archive. Why weren't they removed remains a mystery. Some of these fighters might be added with updates, who knows. Or may be there are more than just two unlockable characters.

Several reviews for the game appeared online (these are also the source of the screenshots posted above):

Unlike its Java counterpart, this version actually has an official web page and is mentioned on EA Mobile's Website. Click here to visit the web page.

The game can be purchased via the ITunes App Store.

Johnny Cage - In Your Face Video

A new Mortal Kombat video has been released: Johnny Cage - In Your Face: 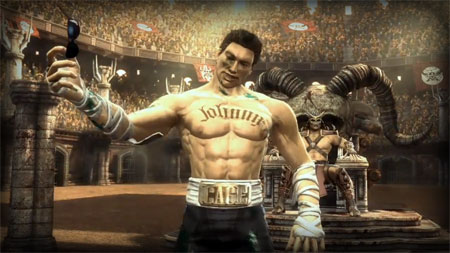 After two major leaks happened, one being a photo made at Netherrealm Studios and another being the sound files that leaked at the Official Mortal Kombat Website, that included the introduction "We are many you are but one...", Ermac was finally officially revealed in the latest issue of the Official PlayStation Magazine, alongside the PlayStation 3 exclusive God Of War character Kratos.

In the magazine you can see his render, which is actually what you already saw on the leaked photo and a couple of screenshots that show the character during battle.