The seventh issue of our Kombat Kolumns is already available for all of you to read. This week's kolumn deals with the Sega Genesis/Mega Drive Mortal Kombat games and will sure bring a lot of nice memories to all of the old school fans.

Click here to read the seventh issue of our Kombat Kulumns. Don't forget, in two weeks the next issue comes out.

We would really love to hear your opinion on the Kombat Kolumns section. So give us some feedback and help us make the section even better.

Today Ed Boon published a screenshot from an early build of Mortal Kombat: Deadly Alliance. The picture shows the select screen of the game with an early version of Mavado. The Matador looking model used in this version was never added to the final game: 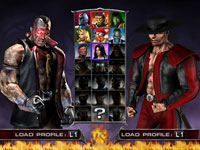 The sixth issue of our Kombat Kolumns has arrived.

In it our kolumnist, ded_, takes a look at the latest release of Mortal Kombat II for PlayStation 3's Online Entertainment Network (SOE).

Click here to read the sixth issue of our Kombat Kulumns. See you again in two weeks.

Ed Boon: Excited about MK9 and WB, but wish we could have released DLC for MKvsDC. Here's a peek..

Too bad that downloadable content was never released for the game. Quan Chi was already in the story line and it would have make perfect sense to have him as a playable character.

It was recently reported that the sale of part of Midway's assets to Warner Bros. has been approved by the bankruptcy court:

According to today's court filings, the judge also approved a settlement between Midway Games' creditors committee and the company's majority shareholder, Mark Thomas.

Warner Bros. had submitted a $33 million bid to buy "substantially all" of Midway's assets. If there had been other bids, the court would have supervised an auction process. But no other parties submitted competing bids, according to a Tuesday court filing by Midway.