Ed Boon has updated his personal website Noob.Com with yet another screenshot from Mortal Kombat VS. DC Universe. This is actually the first image that appears on the website and includes a DC character (The Joker):

Thanks goes to Kevin and chrisv9000 for this news.

The box shot of the Kollector's Edition of Mortal Kombat VS. DC Universe was shown on GameStop. If you think that the standard edition box art was great, then think again: 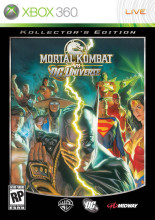 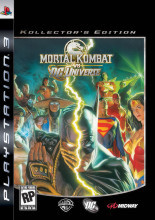 Today, Midway released the final box art for Mortal Kombat VS. DC Universe. The box for the standard edition depicts Mortal Kombat warriors Scorpion, Raiden and Sub-Zero on the verge of an intense struggle with DC Universe heroes Batman, Wonder Woman and Superman as worlds collide in an epic, destructive battle.

Midway has also released five new screenshots that show us Raiden, Baraka and Captain Marvel for the first time in action.

True Game Headz: Hands On With Final Version Of MK vs. DC

True Game Headz has published a Hands On preview of Mortal Kombat VS. DC Universe. Part of it is never before seen footage from the final version of the game. You get to see Story Mode, Captain Marvel and Kano for the first time.

Mortal Kombat is one of the most prolific franchises in videogame history that has captured fans with a distinct vision of visceral combat since 1992. The series has become one of the best-selling videogame franchises of all time, with more than 26 million units sold worldwide. As a bridge between Mortal Kombat's illustrious past and the series' imminent leap to next-generation consoles - with Mortal Kombat vs. DC Universe - the release of Mortal Kombat: Kollection offers a compelling anthology for fans and new players alike.

Packing more punch, fatalities and characters into one box than ever before, Mortal Kombat: Kollection features Mortal Kombat: Deception®, Mortal Kombat: Armageddon®, and Mortal Kombat: Shaolin Monks® and is expected to be available for a U.S. MSRP of $29.99 exclusively for the PlayStation®2 computer entertainment system.

"Mortal Kombat has become a household name thanks to the millions of dedicated fans across the world," said Miguel Iribarren, senior vice president - publishing, Midway. "With the PlayStation®2 still holding the highest market share of any home console, this Kollection allows fans and collectors of the series to play three recent titles for one low price as we ramp up for the highly anticipated launch of Mortal Kombat vs. DC Universe."