It has been more than a month since we last updated with some screenshots from the Wii version of Mortal Kombat: Armageddon. Well the long wait is over. We have 8 new screenshots for you: 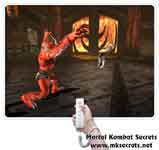 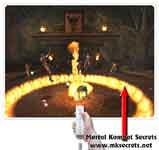 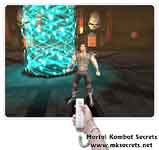 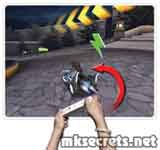 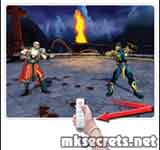 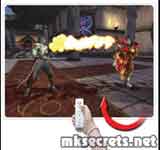 There have been a couple of months without a huge section update, so the time has come for us to show you part of the work that has been done during this time. So we present to you our completely redone Mortal Kombat 4 section.

Our new Mortal Kombat 4 section covers every single aspect of every existing version of the game and as usual contains a lot of unique stuff that has never been shown before. This new section has the following subsections:

- Basic Information
- The Arcade Version - learn every single detail of the arcade version
- The Story - the story of the game as it's told be Raiden (Videos included)
- Bios of all fighter
- The Endings of all character - Every single ending from the game offered for online stream and for download
- Special Moves list compatible with all versions of the game
- Kodes, Secrets and cheats for all version
- Glitches - a total of 22 glitches (most of them with screenshots) for different platforms.
- Behind The Scenes
- In Development - See who was originally planned for the game: Kitana, Noob Saibot, ...
- Videos - Intros, Endings, Trailers, for download and online stream
- Screenshots - Screenshots from the arcade and pc versions of the game.

So, this is it. Go and enjoy our new Mortal Kombat 4 section.

Midway has released the tenth character bio from Mortal Kombat: Armageddon: Onaga. This bio makes it clear that it was in fact Shujinko who managed to destroy the 6 Kamidogus and defeat Onaga:

I had nearly regained my throne as Emperor of Outworld when my plans were undone. My pawn Shujinko had grown more powerful than I ever anticipated. Rallying warriors to his cause, he absorbed their fighting abilities and shattered the six Kamidogu, rendering me vulnerable. Only the amulet I had retrieved from the sorcerer Quan Chi gave me protection.

But as Shujinko landed his final blow, an outside force simultaneously ensnared my soul and expelled me from my host body. I found myself bound to a rune in the Netherrealm. I languished there until I was found by Shinnok, a fallen Elder God. Like me he was trapped in that accursed place, denied domination of the realms by lesser beings. Shinnok offered me a chance at revenge: I would regain my rightful place as ruler of Outworld in return for my unquestioned servitude. I bow to no one, but I considered his offer.

Shinnok was nearing his ascension from the Netherrealm, but he feared another defeat -- either by his enemies or his allies. He would emerge unchallenged if they were all eliminated. To achieve this, he needed an Edenian half-god named Daegon to defeat a fire elemental. The godlike energy Daegon would receive from that victory would bring about this slaughter. However, many other warriors also sought that power. Should Daegon fail, should some other warrior defeat Blaze, Shinnok's plans would go unfulfilled.

Shinnok was most concerned with Shao Kahn, my most hated enemy. He proposed that I feign reluctance, but join Quan Chi's new alliance in order to stay close to the traitor. I would then follow him to the final battleground and prevent him from reaching Blaze. When Daegon finally won the prize, the kombatants would all be slain and I would be given Outworld to rule once more. As an added incentive, Shujinko, languishing in Shao Kahn's dungeon, would be mine to do with as I pleased.

I did not trust this fallen Elder God. I suspected treachery. If all went as he had planned, I would most likely be among the dead. But I accepted his offer in order to free myself from that accursed Netherrealm. Satisfied, Shinnok conjured a portal and spoke through it. He then raised his hands and clenched his fists. With a demonic shout, my soul was freed from the binding symbol and I was released from the Netherrealm. I awoke in my original body, covered in dragon's blood. Before me stood Shang Tsung, Quan Chi, and my hated enemy, Shao Kahn.

I will pose as Shinnok's pawn and join Quan Chi's alliance. Shao Kahn will never reach Blaze. But I would be a fool to allow Daegon victory. Once I have slain the fire elemental and have taken the prize for myself, I will have Shinnok's head. Onaga serves NO ONE!

Hello guys, the first of March is here again and with it another Mortal Kombat Secrets' Anniversary. This one is probably the most special of them all, because today is our fifth Anniversary, which mean that this site has been around for a half of decade.

We really wanted to try and make this day as special for you as it is for us. So, instead of telling the history of the site or showing you screenshots of our old version, we will let you see this history with your own eyes. For the first time since April 17-th 2003

Mortal Kombat Secrets: Version 2 Lives Again
We have completely restored Version two of the site to that same moment when we replaced it with this one. This version is almost completely functional and we hope that it will bring some good old memories to all visitors who stuck with the site during all these years. For those of you who hasn't been around for that long, this version will show you how much we have evolved since those early days of our existence.

Every time on this day we share our future plans with you, and we always fail to finish everything we wanted until the next Anniversary. So this time we will skip this part. The only thing you need to know is that big things are coming and you will not want to miss them.

Well, I now want to put an end of this news, but I cannon, not before I once again thank you, our visitors for being the greatest Mortal Kombat (Secrets) fans and kept visiting this place during all these years.

We will really love if you leave your opinion of our site as a comment to this news. Don't spare criticism because this is one of the ways to help us make this site better. Tell us what you like, what you dislike, what you want to see in our site! Show us what we did wrong! Give us ideas...!