In a press release Midway announced the premium edition and the Nintendo Wii version of Mortal Kombat: Armageddon. Here is the most interesting part of the text:

Available exclusively on the PlayStation®2, three of the four Mortal Kombat: Armageddon Premium Editions will feature metallic packaging covers that highlight some of the franchise's most popular character duos, including: Sindel & Shao Kahn, Johnny Cage & Goro, and Kano & Sonya. The fourth Premium Edition set will feature the general Mortal Kombat: Armageddon retail box art on metallic packaging. The Premium Edition sets have a suggested retail price of $49.95 and will also include the following:

* An arcade–perfect, playable of the original Ultimate Mortal Kombat® 3
* Over 60 minutes of bonus DVD video content featuring a "History of Fatalities" movie, along with new videos for more than 50 of the Mortal Kombat characters
* A metal package created exclusively for the limited edition Premium Edition sets; there will be four unique box fronts in total
* Animation cell cover art autographed by franchise co–creator, Ed Boon

They also released a box art image of the game:

Midway posted a new, updated version of the Full Cast Render for Mortal Kombat: Armageddon. Here are the changes: 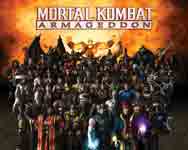 In a news article Games Radar revealed that there will be four different Collectors Edition versions of Mortal Kombat: Armageddon. From the article:

In a press release the rest of the world will get tomorrow, publisher Midway has announced four different Premium Packs for the PS2 version of Mortal Kombat: Armageddon. Retailing at $49.95, three of the higher-end limited editions of the game will ship with different embossed, metallic covers that feature paired characters Sindel and Shao Kahn; Kano and Sonya; and Johnny Cage and Goro. The fourth edition's box art will be identical to that of the "regular" edition of the game (the MK logo), but metallic.
While the boxes are different, all four versions appear to feature the same "kontent:" A 60-minute bonus DVD with a History of Fatalities movie and new videos for more than 50 characters, an animation cell of the cover art autographed by creator Ed Boon and an arcade-perfect version of Mortal Kombat 3.

Over at Midway Boards Cinder explained that there is a mistake in the article. Mortal Kombat 3 will not be the game to be included in the Collectors Edition. It will be Ultimate Mortal Kombat 3. This game will make its first appearance on the PlayStation 2 stage.

IGN.com posted the a news article in which is revealed that there will be a Nintendo Wii version of Mortal Kombat: Armageddon. Here is a part of the text:

"We are extremely excited to be bringing the action of Mortal Kombat: Armageddon to the Nintendo Wii in early 2007," said Steve Allison, chief marketing officer, Midway. "Our Chicago studio, under the direction of Ed Boon, has been working extremely hard to make Armageddon stand out in a big way with the inclusion of the entire Mortal Kombat character lineup, the Motor Kombat mini-game, a new Konquest mode and several other innovative gameplay additions that help keep the franchise at the top of its genre. We're confident that Wii fans will truly appreciate the finished product when it's ready to hit store shelves."