A combo video for N64 Mortal Kombat Trilogy with unrealistic footage and not humanly possible combos. Presented by Selpex and ded_. 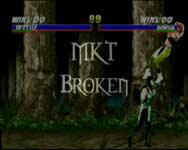 
1UP: Interview With Ed Boon

Another interview with Ed Boon about the Wii version of Mortal Kombat: Armageddon has been posted on 1UP. From the Interview:

1UP: We've seen a few less than enthusiastic comments about Wii from you in the past, so it was a surprise to hear that Armageddon is on its way to the system. How did that come about?
Ed Boon: Actually, my comments in the past were not "less than enthusiastic" -- rather they were responses to questions that I was asked about how Mortal Kombat could be done (with the traditional play mechanic) on a new controller. Since the Wii controller has fewer buttons than a traditional PlayStation or Xbox controller I was wondering at the time what we would be able to substitute for the missing buttons. Remember, at the time of the original interview, I hadn't even touched a Wii controller. As far as doing something new, there are obviously a million new ideas that come to mind in working with what we now know as the Wii controller.
How did Mortal Kombat come to the Wii? Midway has always made games for Nintendo consoles and there's no reason to think that Wii wouldn't support their new system.

1UP: Was it your idea to make the Wii version of Armageddon, or did someone show you a way that it could work that convinced you?
EB: While I'd like to think that I have a role in the decision making here at Midway, there are many more factors involved in making that call. It was a collective decision to bring Mortal Kombat to the Wii, along with several other upcoming Midway titles.

1UP: Have your thoughts on the system being risky for Nintendo ("I think Nintendo would be crazy to bet the farm on such a dramatic departure from what people are accustomed to." -Electronic Gaming Monthly, December 2005) changed?
EB: I believe my comment was referring to the idea of Nintendo only making the new Wii controller and not offering a traditional game-pad controller as another option. I thought they would be crazy to not allow more traditional games to be made for their system and as I suspected, Nintendo decided to also offer a traditional game-pad controller, as well as the new Wii controller. Obviously, Nintendo isn't crazy. Wii all know that!! [Smiles]

1UP: What about your comment that it seems difficult to make a fighter because of the number of buttons available ("I don't know how you could. One of the things about the Revolution controller is that you don't have immediate access to a whole bunch of buttons." -Game Informer Online, March 14th, 2006) -- still agree?
EB: My comments were referring to making our current iteration of Mortal Kombat, meaning the original side to side perspective that was designed with many button inputs in mind. Any time you take a play mechanic that was designed for a specific control scheme and then decide to dramatically change the controller inputs, you will have challenges to overcome. Imagine taking a platform game like Mario Bros. and then someone asks, "Do you think it's possible to make that game with a steering wheel, shifter, gas and brake?" I suppose it's possible. Will it play as well? Maybe or maybe not. That is actually what I was referring to. With that in mind, making our current iteration of MK with a new controller (with fewer button inputs) does impose challenges. But the new controller also opens up a sea of new possible ideas that could not have been considered with the traditional game-pad configuration. That is were the controller gets exciting from a developer's standpoint.

1UP: Smash Bros. on Wii will reportedly not use many of the special features built into the system's controller. Did hearing that make you think -- at least somewhat -- that your original comments were on the money?
EB: Hearing that did make sense (as I explained before) because Smash Bros. was originally designed with a different controller scheme in mind than the new Wii controller. I'm sure a completely new Smash Bros. could be designed that utilizes the new Wii controller, but it would probably be different than previous versions -- a different input scheme and maybe a different camera perspective as well.

1UP: I understand you can't provide specific details on the game at this time, but can you confirm whether it's in the plan to use the "shell" controller for the game or not?
EB: Unfortunately I can't confirm the use of any of the controllers at this time. But I can assure you that we are definitely going to look into all of the controller options available to the Wii. Wii would be crazy not to. Sorry, I couldn't resist. [Smiles] We'll be sure to let you guys know later this year what we at Midway decide to do... we're obviously excited to look at all of the possibilities that the Wii has to offer.

Click here to read the complete text of this interview.

GameInformer has published an Interview with Ed Boon about the latest revealed version of Mortal Kombat: Armageddon for Nintendo Wii. From the interview:

Game Informer: Let’s get this out of the way first thing – Will Mortal Kombat: Armageddon utilize the Wii remote for some kind of motion control or will it focus on the traditional controller?
Ed Boon: Without a doubt, I would love to use the Wii remote in MK: Armageddon. Obviously, a million ideas come to mind but I would much rather come up with a new fighting mechanic and/or perspective (that could take FULL advantage of that unique controller) rather than to shoe horn the controller into a fighting scheme that was originally made for the standard controller we’ve been using for so many years. Unfortunately, time is an issue and we don’t have time to redesign the fighting system from the ground up.
GI: Will the Wii version look any better than the current-gen versions?
Boon: I think if there are new tricks that the Wii hardware can do in displaying our characters and backgrounds, then we will certainly try to use them in making Armageddon look as good as it can. But to me the most important aspect of this version I want to concentrate on is the game play and what innovations we can add using the new controller.
...
GI: Will you utilize the Nintendo Wi-Fi connection for online play?
Boon: I don’t know yet. We don’t have a lot of information about Nintendo’s online plans so its hard to give a very definitive answer as far as online is concerned.
GI: Does this open the door to a Virtual Console relationship for classic Mortal Kombat titles?
Boon: If you mean, is there a chance that a classic MK title might appear on the Wii, that would be great. I would love to see that happen.

Click here to read the complete text of this interview.

Cinder has just posted over at Midway Boards three of the front box images of the Premium Edition of Mortal Kombat: Armageddon: