In a press release GameSpot and Midway announced the Ultimate Mortal Kombat Fanatic Contest. Below is a part of the text:

CHICAGO – August 28, 2006 – Midway Games Inc. (NYSE: MWY), a leading interactive entertainment industry publisher and developer, today announced that it has teamed with GameSpot, a leading source for trusted gaming content and community (http://www.gamespot.com), to bring fans "The Ultimate Mortal Kombat Fanatic" contest, a competition which allows fans to create unique and creative short films showcasing why they are the biggest Mortal Kombat fan. GameSpot will serve as the contest's host site and will feature the user–generated films throughout the duration of the competition. GameSpot staff will judge the entries and one grand prize winner will receive a trip to San Francisco, CA, and the chance to challenge Ed Boon himself at Mortal Kombat: Armageddon at the GameSpot offices in San Francisco. The contest is scheduled to begin on Monday, September 18th, and run through Friday, October, 6th.

"We are very excited to be teaming up with GameSpot and to be utilizing the new User Video feature, specifically, for this contest," said Steve Allison, chief marketing officer, Midway. "Midway is asking our passionate and loyal fan base to tap into their creative imaginations and to create short films that are inspired by the Mortal Kombat universe. The entries can range from serious to tongue–in–cheek; we just want to see what the fans can come up with. By entering the competition, fans will get a chance to share their work with the rest of the world in a big way via one of the most popular videogame sites around. We're eagerly looking forward to seeing the ingenious works that we believe the community is capable of creating."

"Midway's 15–plus years of stewardship of the Mortal Kombat franchise on nearly every imaginable gaming platform has ensured that this series has been one of the most popular fighting franchises on GameSpot," said Henk Van Niekerk, vice president of GameSpot. "This User Upload contest is the type of video event that fighting gamers of all ages can really rally around. It's a chance to show off their skills in front of an audience who will truly appreciate their work."

About the "Ultimate MK Fanatic" Contest

No purchase or payment will be necessary to enter or win the contest and the contest shall be void where prohibited. The contest is scheduled to begin on September 18th and end October 16th, and will be open to legal residents of the 50 United States or the District of Columbia, at least 18 years of age or older. The grand prize winner will receive roundtrip airfare for two to San Francisco to visit GameSpot's studios during the live broadcast of the Mortal Kombat Armageddon tournament finals and will have the opportunity to meet Mortal Kombat's creator, Ed Boon. The grand prize winner and three runner–ups will also receive a copy of Mortal Kombat Armageddon signed by Ed Boon. Additional eligibility requirements and prize restrictions will apply. Visit http://www.gamespot.com for additional details in the coming weeks.

Good Luck to all of the people who will participate in this unique contest.

Click here to read the whole press release on GameSpot.

Scorpion
As Blazes fire extinguished, Scorpions troubled soul suddenly began to fill with joy as his ninja-klan the Shirai Ryu again appeared and thousands came atop the upper flat of the pyramid. Scorpion was more shocked when he had seen his wife and son. But this Reunion fell short as the evil sorcerer known as Quan Chi suddenly appeared. He had took Scoprion’s son and made a portal to the Netherrealm and jumped into it with scorpions son. Scorpion Raged and will not rest till his son is his and freed and Quan Chi is Killed.

Sub-Zero
Essenitally it states that Sub-Zeros kori powers were immensely upgraded due to the Dragon Medallion and that by the time he faced Blaze, he was all too powerful: Sub-Zeros powers have made him a false ice god. Without the permission of such power, the Elder Gods have sent their champions to destroy Sub-Zero.

Chameleon
Once the battle embraced, Chameleon camouflaged himself and hurried unseen to the top of the pyramid. There, he defeated Blaze and the ethereal power took control over him. He was now immortal! Although he was present throughout all the crises of the realms, from Liu Kang's first victory until the return of the Dragon King, he had managed to avoid the looks of others and waited on his moment. His moment had now finally arrived. From this day, the realms will recognize Chameleon as the true champion of Mortal Kombat.

Empowered by the godlike energies received from Blaze, Shang Tsung could now alter the forms outside his own body. Dismayed and angered at such price denied from him, Shao kahn charged the sorcerer, but with a wave of his hand, the sorcerer transformed the once-emperor into a centaur slave. Shang Tsung now rules Outworld.

Kitana
Absorbing the power of Blaze Kitana obtained a psychic connection with the Elder Gods and became their champion. To preserve the integrity of the realms she formed an all female fighting force whose members included Sindel, Jade, Sonya and Li Mei. Together they laid waste to the forces of darkness and trapped them in the Netherrealm forever.

Mileena
For an instant, the power of Blaze united Mileena and Kitana.When the energy disappeared Mileena had become beautiful, but Kitana was horrified to find her mouth filled with long ended sharp teeth. The change in her appearance allowed Mileena to pose as Kitana and finally take her rightful place on the throne of Edenia. She imprisoned Kitana, who went mad in the palace dungeon.

Nitara
The gift of Godlike power transformed Nitara into a blood god. Horified the Kombatants fled from the pyramid but none were spare her wrath. Beginning with Shao Kahn she mutated each of them into her vampire slaves. With the most powerful warriors in the universe at her command Nitara and her unstoppable army easily conquered the realms.

Meat
Meat was an experiment who escaped Shang Tsung's fleshments before he could be completely formed. As the other combatants fought, Meat rushed unseen to the top of the pyramid and defeated Blaze. The god-like energy felt giving him the power to shape shift. With the ability to become anyone, Meat lost sense of identity and disappear into obscure.

Motaro
As fire has licked Motaro's body, he made it to the top of the pyramid. When the fire was finally put out, only then could he feel the familiarity of four legs once again. He had broken the curse that had his people transformed into the minotaurian corpulence so recently?

Please report errors and additions of any kind using our forums.

GameSpot has published Havik's Trading Kard video that will be part of the Limited Edition of Mortal Kombat: Armageddon. From the video:

A denizen of Chaosrealm, Havik despises order and sees it as a threat to everything in which he believes. His mission is to create mayhem and further unravel the fabric of life. He will also destroy anyone who seeks to control others.

The German fansite Mortal Kombat Universe is proud to be the only Mortal Kombat fan site to report live from Games Conventions 2006 that takes place in Leipzig, Germany.

They have posted a lot of screenshots that show Chameleon, Meat, Reptile (new look) in action. They also posted some Endings and a very interesting interview with Shawn Himmerick.

This is only part of the things that can be found on the website, so don't forget to take a look: 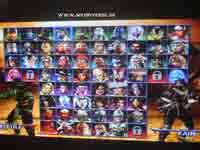 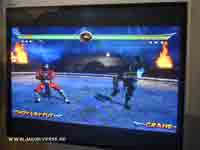 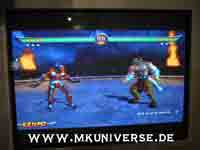 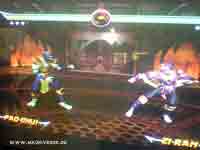 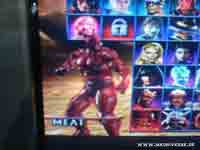 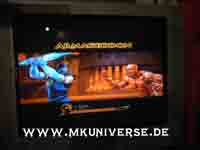 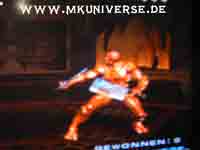 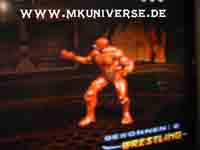 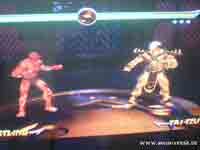 The interview with Shawn Himmerick has already been posted on YouTube so here it is:


And the last and one of the most exciting things, Scorpion's Ending:


Here you may find more endings.

The Official Mortal Kombat: Armageddon Website has once again been updated. 8 out of 10 spots are now filled. The newest image is the coolest ever posted on this page. It is a render of Blaze on the top of the Pyramid: 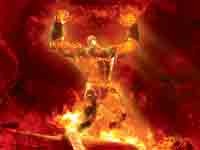