Cinder of Midway Boards has just posted the background music from the Battle Arena and a Sub-Zero koncept from the Motor Kombat mode of the game. 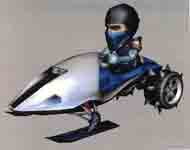 The Official Mortal Kombat: Armageddon Website has once again been updated. 9 out of 10 spots are now filled. The new addition is a render of the Subway Arena that appeared in Mortal Kombat 3 for the first time.

We hope that the other Mortal Kombat titles will follow it shortly.

Thanks to subzero3214 for this news.