We have just received the results from yesterday's Unofficial Ultimate Mortal Kombat 3 tournament.

The hosts of the tournament would like to say thanks to all the players who showed up and made it all happen.

Over on the Midway Boards, Cinder has posted a new Koncept Art image of the Netherrealm and a wallpaper of Rain. 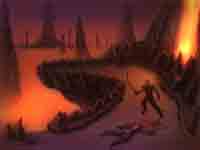 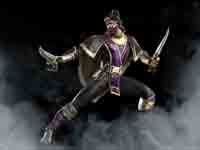 Thanks to our forums member MKRayden for this news.

GameSpot released a video interview with Ed Boon with a lot of gameplay footage from E3. In it Ed Boon reveals a lot of information including the name of the final boss. Surprisingly to all of us, it is not a new but an old character: Blaze. It appears that he has gone true some sort of transformation, that will probably take place somewhere during the Konquest.

Unfortunately this video is currently not downloadable, you can only watch it online.

Now go and enjoy. Make sure to check back soon as there may be updates of this news.

Midway have once again updated the official Mortal Kombat: Armageddon website. This time they added an image of Goro's Lair.