E-mail to the producers of MK3

"Mortal Kombat fans, while we are making preparations for the next MK movie, we are happy to offer you the ability to get your thoughts directly to the producers of the film. We are replacing this message board with an email box for you to contact the producers directly. email your desires for the movie to:

We will read the messages, but because we are busy with the film, we may not respond directly. Please don't send any fanfic or spec scripts as they will be deleted and not read. Share with us who you would like to see in the next project, who you wouldn't like to see, and who your favorites are!

All correspondence becomes the property of Threshold Entertainment."

To see the page with the message click here!

There is something you must know if you want to send something. The link to the e-mail is different from the displayed address.

We are not sure which the correct address is, so use the both if you want to send something.

IMDB.com updated with new information about Mortal Kombat 3: Domination. The status of the film has been changed from "in production" to "Completed". Unfortunately there is no Release Date yet.

Taglines
The gods have fallen... The tournament has been broken... The rules no longer matter...

Plot Outline
After Liu Kang, Sonya, and Jax defeated Shao Kahn and prevented merger of the Outworld with Earth, Shinnok exacts his revenge by forming an alliance with the powerful sorcerer Quan Chi. Together, they open a portal to Earth in a bid for ultimate domination. Lord Rayden, now an elder god, becomes dismayed by this horrific turn of events and calls forth the warriors of Mortal Kombat once more. Discovering a loophole in the rules of the tournament, and needing every ounce of help he can get, Rayden summons forth the soul of deceased warrior Johnny Cage and resurrects him so that he may join his fellow fighters and send Shinnok and his allies back to hell once and for all.

In the original Plot Outline, that was published on IMDB.com Shinnok was replaced with Shao Kahn. But Kahn is already dead, so we think that Shinnok is the person, who will ally with Quan Chi. 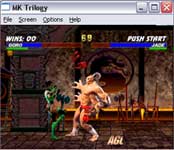