Here are they, the first scans from the newest issue of PSM. What is new? Well there is so much... but first of all we finally have the first Reptile's screenshot. He looks terrific and more like a real Reptile.

In this magazine there is also info about one new fighter. Her name is Nitara and she is a vampire, who comes from the Outworld.

With Nitara in the team of the fighters they are now 23.

With the new Kurrency system you will be able to discover 676 secrets. There will be hidden characters, alternative costumes, renders an more...

GameSpot Complete has updated with 6 new Mortal Kombat: Deadly Alliance movies from TGS. In these movies we can see for the first time the Test Your Might minigame, Kitana (masked) in battle, Johnny Cage's Shadow Kick and more... Here are some screenshots from the movies. 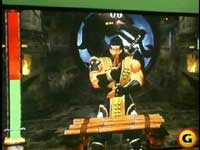 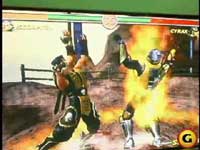 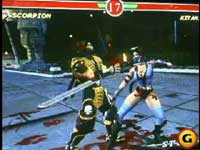 "KOEI has recently picked up publishing rights to several of Midway's upcoming releases, and the fruits of this deal are being shown at this year's Tokyo Game Show..." So begins the article that was posted at GameSpot.
One of these games is Mortal Kombat: Deadly Alliance. KOEI shown one much completed version of the game. Here are the main changes:

1. Special Moves - "Sub-Zero can freeze people with an ice blast, but unlike previous MK games, the target doesn't instantly freeze. Instead, the character slows down to a standstill as they turn to solid ice." Also some other Special Moves were shown, Cyrax' bombs, Scorpion's rising flip kick and Johnny Cage's ever-popular shadow kick.

2. Test Your Might - This minigame is now in too but there are no changes in the gameplay yet.

3. Hsu Hao - This is a new fighter in the team. Hsu looks a bit like a wrestler wearing a cop hat. I think that he is the character known as Khan.

4. Three never seen before arenas - based on the IGN's article.

"The first looks like a haunted harbor of sorts. Dilapidated pirate ships bob in the ocean behind you as the fight rages on. The second new arena we saw was a sort of circular gondola floating down the river (reminiscent of certain stages in Soul Calibur). As you fight, oarsmen row the platform of death along the water. The final new arena is a vortex of sorts. You battle on a stone platform as a huge funnel cloud in the background sucks everything into itself. Swirling debris was constantly flowing into the tornado, although the fighters' footing didn't seem to be affected by the heavy winds."


MK: DA in the Next PSM Magazine

The cover of the latest, November PSM magazine has a nice picture of Sub-Zero who holds the head of a ninja, probably Scorpion. The magazine will arrive very soon. Unfortunately there is no info about the content of the issue so be sure to by it.

These movies are from the Nintendo 64 version of the game.

Thanks to MANUEL MORALES for the information in this news.