In the last few days appeared lots of screenshots taken direct from E3 in Los Angeles. There are many fan sites, where you can see them. Now I'll show you three new renders and only one Li Mei's screenshot. These pictures are not from E3. 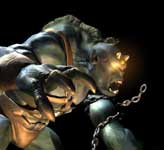 So, E3 is over and now I'll generalize the all new information.

1. 20 non-hidden selectable characters
2. Blind Kenshi (name is not confirmed yet)
3. No morphing ability for Shang Tsung, for now
4. Moloch will be a sub-boss like Motaro and Goro
5. Some past arenas return
6. Storyline primarily written
7. All character endings will be identical on all platforms

1. There are two new returning characters confirmed for the next Mortal Kombat. They are Kano and Johnny Cage.
2. The characters at the select screen will be 20, now there are 8 playable (Scorpion, Sonya, Jax, Blind Kenshi, Quan Chi, Li Mei, Sub Zero and Shang Tsung) and 12 unplayable (Johnny Cage, Kitana, Kano, Cyrax, Reptile, Raiden, Drahmin, Mavado, Female Sub Zero, Kung Lao and two unknown).
3. There is now availble select screen that you can see here. TRMK published first this and others screenshots, so check their site for more info. 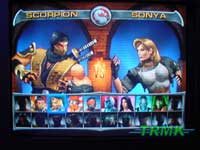 The Official Mortal Kombat: Deadly Alliance site was updated. A part of this big update are new characters and arenas screenshots. Now you can download there the two new game trailers, which was first seen at GameSpot. 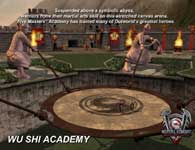 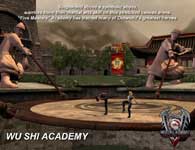 The next screenshot is from the second GameSpot trailer. It shows for the firs time Li Mei in action.

There is a new Mortal Kombat: Deadly Alliance video at GameSpot. It is really cool, but the bad news is that you have to pay if you want to have it. Here are some screen captures from the trailer.. 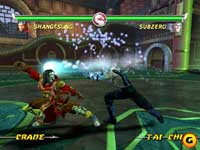 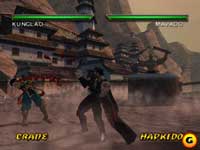 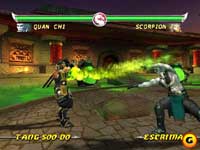