The Prey Skin Pack for Mortal Kombat X will arrive at the same time as the Predator DLC, July 7th for Kombat Pack owners and July 14th for everyone else. The Skin pack features Infrared Scorpion, Carl Weathers Jax and Commando Johnny Cage. We created a video preview with impressions for the three skins included in the pack and you can watch it here:

The idea here is to simulate one of Predator's vision modes. To be honest, I don't like the skin at the moment. Why, well there are several reasons:
- Its just a cheap repaint of the standard Scorpion skin, so nothing really creative about it.
- Its the 8th skin for the character. I know Scorpion is the most beloved
character in the franchise, but there are plenty of characters who just have 1 or 2.
- I think it will just look weird in the game. 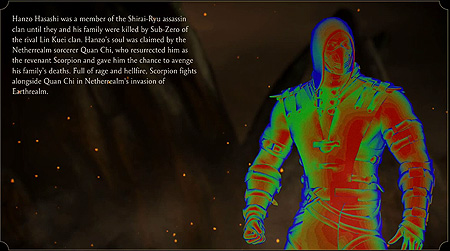 In spite of all this, I hope that the skin will change my mind when it arrives.

At first, nothing really special about it. In fact if you look at the colors it's really close to Hotshot Johnny Cage.

All this disappears however in the moment you realize that the skin is inspired by Arnold's look in the movie. Unfortunately NetherRealm were probably unable to obtain the license for Arnold's face if they tried at all so they went with the next best thing, and they did an amazing job. Take a look at some pictures: 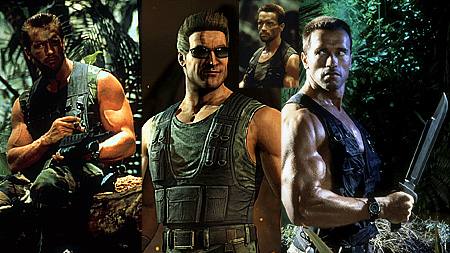 The final skin of the prey pack is also the best one. It's a Carl Weathers Jax. In case you are asking yourself who that is, this is the actor who played Dillon in the predator movie.

Netherrealm has once again done a great job with the resemblance. Take a took at some images: 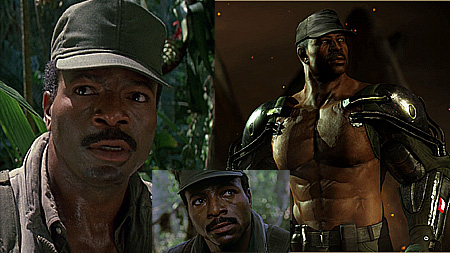 The Predator DLC will be released on July 7th for Mortal Kombat X Kombat Pack owners and on July 14th for everyone else so we thought that this might be the best time to take one last look at everything we know. Take a look at the official announcement teaser:

For this news we are going to try to stay as much away from leaked information as possible as we don't want to ruin the character for you. So, no Fatalities, no Brutalities, no X-Ray and definitely no gameplay here. A few days ago we made a video preview for the Predator, so the information there might be a good way to start:

The three variations of the Predator are: Hunter, Warrior and Hish-Qu-Ten. And this is the only place we will break our rule and show leaked images as they are already everywhere, even on GameSpot:

Netherrealm Studion has also released several different images to help heat things up before the launch of the Predator. Among the images are two posters, the very first screenshot of the character and an artwork of the spaceship interior, probably part of his bio:

Excited about the arrival of the Predator, we sure are. One last thing that you should take with you from this news. The release date of the Predator Kombat Kast is July 6th and there we will be able to see the very first footage of the character: 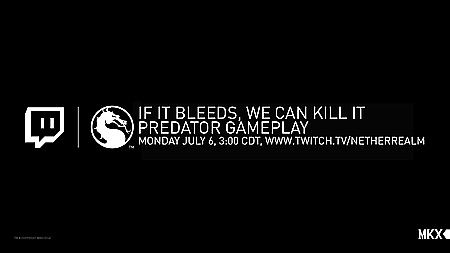 After the success of the Tremor in Mortal Kombat X petition, fans started creating online petitions for everything they ever wanted in the game.

So what makes the petition I am writing about any different? It is unique and does not necessarily revolve around the latest game of the franchise. Further more, it is reasonable and delivers an interesting idea for the guys over at Netherrealm and Warner Bros.

The petition is about a creation of a Mortal Kombat Lore Encyclopedia. Take a look: 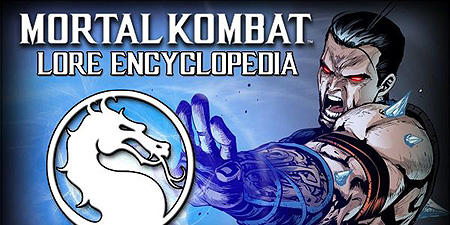 We as Mortal Kombat fans would like to finally have a definitive book encompassing the Mortal Kombat Lore. Over the previous 20+ years, we have had a bunch of games and comic books, yet we have nothing like this. When your game is built around lore, you need something like this for your fan base. Marvel and DC comics both have various encyclopedias. Something like this would be vital for the old fan base and the new, and would be an essential collector's item for every fan. We are petitioning you to make this happen, to make this a reality for all fans of the long running series.

The petition has already managed to catch the eye of Mortal Kombat X Comic book writer Shawn Kittelsen who appears to be interested in taking over such a project in case Warner Bros decides to do it:

THANK YOU to every fan hungry for a #Kombatpedia! I don't know where this leads, but if the call comes, I'll answer! https://t.co/zaMeWlnHQG