Michael Jai White Returns as Jax in the Movie, NOT in Legacy

While answering a question on Twitter, Michael Jai White, the actor who portrayed Jax in Mortal Kombat: Rebirth and in the first season of Mortal Kombat: Legacy confirmed, that he is going to portray the character in the new Mortal Kombat movie, but won't star in the second season of Legacy:

@sweetre15 I'm coming back to do the Mortal Kombat movie but not the web series.


MK: Legacy - First Behind the Scenes Image from Season 2

The very first behind the scenes images from the production of the second season of Mortal Kombat: Legacy has made its way online: 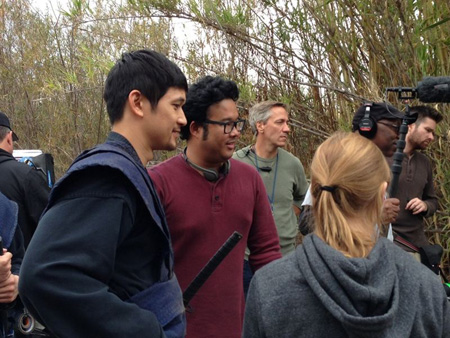 MK: Legacy 2 - Release Date and Cast Info. Guess Who Is Back

More and more Mortal Kombat: Legacy Season 2 information is coming our way. Warner Bros. has just issued a press release with tons of information about the second series. The following cast members have been officially announced: 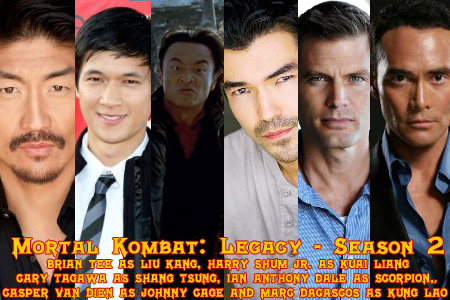 The second season with debut worldwide exclusively on Machinima in the second quarter of 2013 with the very first clip from the series making its way to us as early as February 17th at the 2013 Streamy Awards.

From the press release:

FIRST CLIP TO PREMIERE AT 2013 STREAMY AWARDS ON FEBRUARY 17

The first season of "Mortal Kombat: Legacy" was one of the most-viewed web series of 2011 with more than 60 million views to date on Machinima. In the second season the saga continues as Liu Kang and Ermac join the ranks of fighters introduced in the first season of the web series including Kenshi, Kung Lao, Kuai Lang, Stryker, Kitana, Mileena, Johnny Cage, Scorpion and Sub Zero. This new season will uncover the rivalries and histories of these fierce warriors as Raiden and his recruits clash against the dark forces of Outworld. The epic battle for Earthrealm has finally begun!

"Fans are in for a real treat with the second season of Mortal Kombat: Legacy," said Tancharoen. "With added visual effects and storylines that dive deeper into our warriors as they make their way to the tournament, we’re taking this series to a whole new level. I'm really looking forward to showing fans the first clip during the Streamy Awards on February 17. "

“Machinima and our audience have been eagerly awaiting the next chapter in this series, and I’m thrilled to announce that Mortal Kombat: Legacy 2 will return to its original home on Machinima,” said Allen DeBevoise, Chairman, Co-Founder, and CEO of Machinima. “We have become a destination for episodic narrative series thanks in part to the first season of Mortal Kombat: Legacy, and we look forward to breaking new ground with this much anticipated new season.”

If you are a fan of Mortal Kombat: Legacy then you are probably wondering, what happened with season 2, which was announced last July. Well, things are finally moving forward and we are happy to report that filming for the season began 4 days ago on November 28th. As usual the internet immediately filled with news about who is returning, who is not and who the new guys are. The list is of course far from complete at this stage:

Those we are leaving behind:
- Jeri Ryan will not be back as Sonya Blade. The actress is currently shooting season 3 of Body of Proof. No information is currently available as to how Ryan's departure will affect the character. Will Sonya be recast or written out.
- Tahmoh Penikett is not returning as Stryker. No information on the fate of the character here as well.
- Jolene Tran, who played Mileena in Season 1 will not be returning.
- Matt Mullins will not return as Johnny Cage as the studio has decided to go in a different direction and recast the role. In an interview with Shogun Gamer an obviously bummed out Mat Mullins shares some of the details regarding his departure from the series:

Matt: So then they requested footage from films that I worked on this last year which I gave them, and then they wanted me to actually read again for the second season. So I read and I auditioned for the same part as I did in season 1. Then they basically decided to go in another direction.

Of course I’m bummed out since I the role of Johnny Cage was something I felt I brought something unique to because the ability to make the action look good is important to Mortal Kombat, especially for a then web-based series. There’s a very quick turnaround time for someone to pull off the type of action that needs to be done and of course I felt that I brought something to the acting side as well.

Ironically my episode pretty much mirrored this entire situation that I went through. Almost identically which is pretty strange since I thought Shang Tsung was going to walk in my door after I got the news. Maybe if the film does come around things will change and I can get in that. But the production schedule is pretty short on the series so it would’ve been a nice thing to do and knock off. I was actually out of the country for six months this year working on different projects so it would’ve been nice to end the year this way, but overall this was a very good year to me.

Those, who are staying with us:
- Ian Anthony Dale is returning as Scorpion and was ready for shooting on day 1.
- Sam Tjhia who played Kitana in Season 1 posted on twitter, that she will be on the set on December 1st but without mentioning the name of the project she is working on. So, this one is still unconfirmed.

The new guys:
- Dan Southworth, the Quantum Time Force Ranger is joining the cast as a currently unknown character.
- Harry Shum Jr, best known for his portrayal of Mike Chang on the Fox television show Glee is another newcomer to the series and is playing a yet unknown character.

The second season of Mortal Kombat: Legacy was announced by series director Kevin Tancharoen in July:

Kevin Tancharoen also announced on Twitter that the second season of Mortal Kombat: Legacy will not affect the production of the new Mortal Kombat feature film. According to the latest reports the movie is also in the works and has a budget of about $40-$50 millions.

Netherrealm Studios has released another video from their upcoming fighting game Injustice: Gods Among Us. It shows gameplay footage from a battle between Deathstroke and Batman: