Matt Mullins on The On Blast Show

Episode 24 of the The On Blast Show had one very special guest, former Johnny Cage actor Matt Mullins. Matt Mullins played the character in Mortal Kombat Rebirth and in the first season of Mortal Kombat: Legacy. For the second season of the series Matt Mullins was replaced by Casper Van Dien, an action that was faced with a lot of criticism from the Mortal Kombat community:

A lot of famous people from the Mortal Kombat universe have been guests on The On Blast Show, including John Tobias and Daniel Pessina. If you are interested in watching some of the older episodes, visit the official YouTube channel of the show.

DC Comics officially announced its plans to release action figures based on the upcoming game Injustice: Gods Among Us:

Adding to the excitement around next year’s launch of Warner Bros. Interactive Entertainment’s “Injustice: Gods Among Us” game, DC Collectibles will be releasing an all new line of highly detailed and articulated 3 3/4” action figures based on characters from the game. The first round of two-pack sets will be released in April 2013 and will feature Green Arrow paired with Deathstroke, and Wonder Woman paired with Solomon Grundy. Each set costs $29.95.

The launch of this new line follows DC Collectibles successful run of 3 3/4” action figures as Con exclusives during 2012. The Injustice line will be available broadly at comic book retailers and online at www.shopdccollectibles.com. Keep an eye out for more Injustice two-pack sets coming from DC Collectibles very soon!

DC Comics announced that it will release a 3-issue prequel comic books. Written by Tom Taylor and illustrated by Jheremy Raapack the series will explain the events that lead up to the start of Injustice: Gods Among Us. The stories will be digital first, starting in January 2013 and will appear in print at the end of each month:

Click here to learn more about the upcoming comic book series based on Injustice: Gods Among Us.

The Making of Goro (Part 2)

studioADI, one of the special effects studios that worked on the original Mortal Kombat movie released a second documentary video about the making of the four armed Shokan Prince, Goro:

By 1994 we'd had success with the lip syncing Bishop head in ALIEN 3 and the talking Meryl Streep in DEATH BECOMES HER. MORTAL KOMBAT presented a new challenge in speaking animatronic characters. Namely more action and more screen time. As if that wasn't enough, we decided to add dilating pupils into the mix. This was an unusually tough project, beginning with a 3 month build schedule. Years later we were thrilled to hear Richard Taylor say that he and Peter Jackson felt it was a "seminal achievement in animatronics". Here's a glimpse at Goro before we put his skin on!

The first video was published back in June:

Mortal Kombat: The Movie was featured in episode four of our own The History of Mortal Kombat Series:

The sixth episode of our Mortal Kombat History Series is here. Entitled Soul of a Warrior this new episode will pick up where Episode 05 left of and tell you the next chapter of the history of the Mortal Kombat franchise:

Many of you were interested in the entire Mortal Kombat Conquest - Movie timeline, that was briefly shown in the episode. It resolves the cliff hanger ending of the series and aligns it with the two feature films. So, by popular demand... 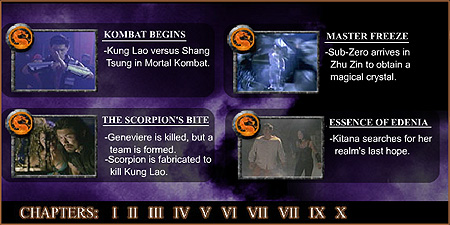