Curt Chiarelli, the sculptor who build the original Mortal Kombat 1 stop motion model for Goro has some early pictures of the sculpture on his DeviantArt Page:

This is the original clay sculpture I did for the stop-motion animation model of the character Goro from the video game, Mortal Kombat in 1991.

Vincent Proce is a former Midway artist who also worked on early designs for Mortal Kombat 9. He uploaded his art work for all of us to enjoy:

I was only asked to do a few and with some very specific direction, but I also took the liberty of presenting a few concepts more to suit my own taste, hoping they would want to take the game in that direction.

The first three concepts I did (Reptile, Johnny Cage and Cryax) I had no interaction with the team and are the ones in which I branched out on my own.

I had just rolled off of another project and moved right to MK9 and these were the first pieces I showed to the guys. The first version of Cryax had a face that Ed Boon pointed out to look like Howard the Duck (he was right it did have the shape of Howard the Duck) so I changed that, but that was all I changed.

Additional DLC For Mortal Kombat 9 Not In Development

Mortal Kombat Kommunity Manager Rigo Cortes confirmed on Twitter that the development team is currently not working on additional DLC for Mortal Kombat 9 (2011):

@MKUNIVERSE Urban legend. We are not in production for additional DLC

Warner Bros. announced today that Mortal Kombat 9 has sold over 3 000 000 units worldwide. From the press release:

Latest Release from Warner Bros. Interactive Entertainment is the Most Successful Console Game for the Iconic Franchise

Mortal Kombat, developed by NetherRealm Studios, led by Mortal Kombat creator and creative director Ed Boon, launched on PlayStation®3 computer entertainment system and Xbox 360® video game and entertainment system from Microsoft in April 2011. In addition to the full game available at retail, downloadable content (DLC) has been released for the game offering four warriors, including the return of fan favorites Skarlet, Kenshi and Rain and an all-new competitor in the coliseum - legendary dream stalker Freddy Krueger - who now features two vicious bladed gloves. Each DLC character comes with his or her own move set, arcade ladder story ending, and two deadly fatalities.

“We are very pleased with the success of Mortal Kombat, as it surpassed our expectations in becoming the #1 fighting game in North America released so far this year,” said Martin Tremblay, President, Warner Bros. Interactive Entertainment. “NetherRealm Studios delivered a high quality game which has exceeded our sales goals. We'd like to thank our entire team and all of our partners for their innovative campaigns and tremendous support of Mortal Kombat, as the game sales continue to grow."

“All of us at NetherRealm Studios are very excited that players have embraced Mortal Kombat. The game was a labor of love for us and we could not be more pleased with its performance,” said Ed Boon, Creative Director, NetherRealm Studios. “Fan reaction to this latest installment has made all of our hard work worth it.”

Mortal Kombat is a triumphant return to the game’s original mature presentation offering over-the-top fatalities and cringe-worthy X-ray moves. Going back to a 2D fighting plane, this latest iteration in the franchise introduces a number of new game-play features including Tag Team, Challenge Tower, and a deep story mode. Players can choose from an extensive lineup of the game’s iconic warriors and challenge their friends in traditional 1 vs. 1 matches, or take on several players in the new online King of the Hill mode.

The legendary fighting game is now available in North America for $59.99 on the PlayStation®3 computer entertainment system and Xbox 360.

Mortal Kombat co-creator John Tobias, who has worked on all 2D games, the first two action adventure games, Mortal Kombat 4 and who illustrated the Mortal Kombat VS. DC Universe comic book has been very active on Twitter lately. He has revealed original characters artwork and background story from Mortal Kombat 1 and Mortal Kombat 3 that has never made it into the public even after almost 20 years. The information includes cut characters, original story and designs, original names, behind the scenes photos and more. Take a look guys and follow John on Twitter for more: 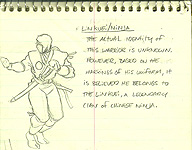