Mortal Kombat 2011 Sells More than Million Copies in the USA

GiantBomb reported today that Mortal Kombat (2011) with its Aptil 19th release has sold over 900 000 copies and currently dominates the April chart:

After the article was posted, Ed Boon added that the number is only for the US and the Kollector's and the Tournament Editions are not included and Mortal Kombat 9 has in fact sold more than a million copies.

Today Netherrealm Studios and Warner Bros officially announced the Mortal Kombat Arcade Kollection for XBox Live Arcade PlayStation Network and Windows PC. The collection is developed by Other Ocean Interactive, the team that worked on the Nintendo DS and XBox Live Arcade ports of Ultimate Mortal Kombat 3. Click on the links to read our reviews. The collection is scheduled for release in late summer 2011. From the press release:

MORTAL KOMBAT ARCADE KOLLECTION TAKES GAMERS BACK TO THE ARCADES
Iconic Arcade Games Will be Available on PSN, XBLA, and on Windows PC

Burbank, Calif. – May 12, 2011 – Warner Bros. Interactive Entertainment today announces Mortal Kombat Arcade Kollection for PlayStation®Network, Xbox LIVE® Arcade for the Xbox 360® video game and entertainment system from Microsoft, and Windows PC. For the first time ever, the original Mortal Kombat arcade trilogy - Mortal Kombat, Mortal Kombat 2 and Ultimate Mortal Kombat 3 - have been brought together into a single collection which will be available for download in late summer 2011.

“We are very excited to finally have the first three Mortal Kombat games available in one download package for long-time and new fans to play,” said Ed Boon, Creative Director, NetherRealm Studios. “With the release of our 2011 Mortal Kombat, and its return to 2D game play, players have been asking for these classic titles and we are happy to deliver them.”

Developed by Other Ocean in conjunction with NetherRealm studios, the Mortal Kombat Arcade Kollection will offer fans the chance to play through the games in their original arcade state and rediscover all their favorite characters, fatalities and environments as well as relive some of the franchise’s most memorable secrets. In addition, this new collection will feature online play, leaderboards, achievements and trophies.

An arcade-perfect port, the Mortal Kombat Arcade Kollection brings players their favorite Mortal Kombat arcade classics for $9.99 on PlayStation Network or 800 Microsoft Points, to put it in arcade terms - 40 quarters ($10).

MovieWeb has posted an exclusive interview with Mortal Kombat: Legacy's director Kevin Tancharoen. In this interview he talks about his plans for a the second season of the show if a green light is given by Warner Bros. He also talks about the possibility of a DVD and Blu Ray releases of the show and the huge amount of Special Features he would love to include. From the interview:

If Season 2 does come, are there any other new characters you want to introduce?

Kevin Tancharoen: I want to put up Kabal, for sure. I think he's got such a great story and he's such a cool character, and those hooks are awesome. I think the most challenging one I want to put up is Goro. I think everyone wants to see Goro, but we have to step up the game with it. In the original, they did an animatronic, which, at the time, was fantastic. Would that hold up nowadays? Absolutely not (Laughs). We've got to make that character so awesome, and that's what I'm most excited about doing, but it will also be the most challenging, because of the nature of the monster he is.


Click on the image below to read the entire interview. 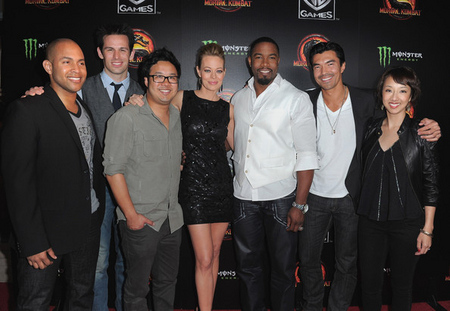 Thanks to Jason Leyanna of Realm Of Gaming for the heads-up on this story.

The fifth episode of Mortal Kombat: Legacy has been released and it is the second part of Kitana and Mileena's story. Click on the image below to watch it:

A new Mortal Kombat fight stick will soon be in stores. It is once again produced by Performance Designed Products (PDP) and GameStop is the first to give us a sneak peak. The stick is available for pre-order from their website for both PlayStation 3 and XBox 360. The fight stick itself will be released on July 1st, 2011.

Visit our Mortal Kombat 9 (2011) section for the most up to date Kodes, Secrets, Special and Finishing Moves, Videos, Trailers, Wallpapers and other media.