A new Mortal Kombat 11 patch has been released for both PS4 and XB1. This includes mainly character-specific adjustments and one general gameplay adjustment. Here are the patch notes:

General Gameplay Adjustments
* Fixed a rare issue that could occur after a Getup Forward Roll has been interrupted that could cause characters to move through each other when performing certain attacks (e.g. Jade's Blazing Nitro Kick)

Mortal Kombat 11 Already has a huge resume of accomplishments, and it just got yet another to add to it. As of yesterday, the 23rd annual D.I.C.E. Awards took place, and MK11 was nominated for 3 awards: the Fighting Game of the Year award, Outstanding Achievement in Original Music Composition award and the Outstanding Achievement in Sound Design award. MK11 didn't win the latter two, but it did win the first one, taking the award for the Fighting Game of the Year.

Congratulations to MK11 for winning another award.

As we had with several special Skins over the last couple months, and as promised by Derek Kirtzic of NetherRealm Studios in the latest Mortal Kombat 11 Kombat Kast, the Kold War Skin for Skarlet will finally be available for everyone this Friday at the MK11 Time Krystal Store. According to the official Mortal Kombat Twitter page, the Skin and it's alternative color counterparts will be included in 3 bundles that will be available in 24 hour rotations over 6 days.

Be sure to get the Skins and the bundles once they available at the MK11 Time Krystal store.

Mortal Kombat Legends: Scorpion's Revenge Digital and Blu-Ray release dates has been announced for this coming April. The Digital version will launch on digital services on Sunday, April 12th followed by three physical editions (4K UHD, Blu-Ray, and DVD) to be release on Tuesday, April 28th with all three versions to include a digital copy for Movies Anywhere. 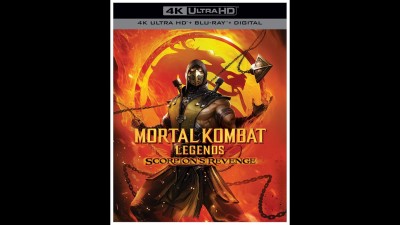 A batch of bonus features will also be included with the release:

* From Epic Game to Extreme Animation – Mortal Kombat co-creator Ed Boon and the filmmakers reveal the creative process behind adapting the best-selling game to an all-new animated film.
* The Weapons, Wardrobe and World of Mortal Kombat Legends – The artists reveal the design challenges of animating the world of Mortal Kombat, from authentic armor to wildly imaginative weapons and fantasy settings.
* The Savage Sound Design of Mortal Kombat Legends – This hard-hitting audio exploration reveals the art of designing the sonic language of the fight scenes.
* Mortal Kombatants – Dive deep inside the cast of characters to reveal their unique abilities, signature moves and backstories.
* Filmmaker Commentary – Producer Rick Morales and screenwriter Jeremy Adams sit down for an insightful audio commentary that reveals the process of creating a compelling animated film based on one of today’s most popular fighting games.

The official Mortal Kombat YouTube page has put the official trailer for Final Kombat, the final E-Sports tournament in the Mortal Kombat 11 Pro Kompetition series. As the trailer shows, this event is going to show a bunch of appearances, as such from Cary Tagawa (voice and model for Shang Tsung in MK11 and other MK media), Todd McFarlane (creator of Spawn), Keith David (voice of Spawn in MK11 and other media), members of NetherRealm Studios and more. In addition, the event is going to include bunch of reveals, including the MK11 Spawn gameplay trailer, the Mortal Kombat Legends: Scorpion's Revenge Red Band trailer, and more.

The Final Kombat event will take place on March 8th, 2020. So be sure to check it out catch all of the action and all of the appearances and reveals that are in store.