The Mortal Kombat X comic book series is an ongoing series of prequel comic books based on the game. Written by Shawn Kittelsen the series explains the events that lead up to the start of the Mortal Kombat X video game. The series is a digital first with printed graphic novels released later, combining several of the digital issues. 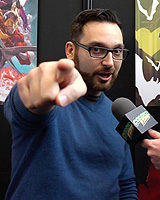 In December 2014 we sat down with Mortal Kombat X Comic Book writer Shawn Kittelsen and talked about the return of the Mortal Kombat franchise to the world of comic books with the series.

You can read it here

- Release Dates: Apr 08 2015 (#1: Jan 6 2015, #2: Jan 11 2015, #3: Feb 25 2015, #4: Mar 11 2015)
- Synopsis: #1: Get over here…for an all-new digital-first series set before the events of 2015’s highly anticipated game Mortal Kombat X! Prepare yourself for the brutal adventures of all your favorite Mortal Kombat characters and witness the rise of the next generation of Kombatants!
#2: Scorpion and his newest companion set off in deadly pursuit of Raiden! Meanwhile, as the daughter of Johnny Cage and Sonya Blade, Cassie Cage thinks she’s seen it all. But when she finds herself in an illegal MMA deathmatch, Cassie must decide if she’s ready for her first taste of Mortal Kombat!
#3: As the civil war in Outworld rages on, Kotal Kahn suffers an unimaginable loss and enlists the power of the Kamidogu to avenge his fallen ally. But will blood magic make Kotal powerful enough to take down Outworld’s champion? Enter: Goro!
#4: Scorpion vs. Raiden! Red Dragons vs. Black Dragons! And a powerful new threat emerges! You do not want to miss the blood-soaked finale of our first story arc!