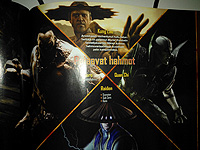 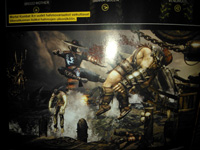 AeroGrunt has translated part of the article over at the TestYourMight Forums. Take a look:

"Unfortunately we couldn't get to play the story mode yet at the studio visit, but the game's story jumps 25 or so years into the future from where MK9 ended. From what we've seen and heard the ruler of the Outworld is now Kotal Khan and Johnny Cage and Sonya Blade have a daughter called Cassie. Even Scorpion has a new Sub Zero to face off against. The biggest question mark right now must be Kung Lao, who has proudly aged and seems to have escaped the last game's ending."

"Good old hat-thrower is how ever fully playable with the rest of the released characters and according to Ed Boon is one of the most diverse fighters in the game. Like the other characters he has three different playable variations, each one bringing new tricks into the gameplay."

"The differences between Kung Lao's Tempest-, Buzz Saw- and Hat Trick -variations happen to be the biggest ones yet. With Tempest Kung Lao uses more spinning attacks and has the ability to set his hat to spin around him as a shield of sorts. In his Buzz Saw variation his hat is sharpened with razor blade edges and allows the player to control his hat throws more. Hat Trick is the most experimental of the three, because you can throw and call back your hat at any point you want. This keeps the opponent on their toes, because the hat can extend combos."

"If bugs or glitches would appear in Mortal Kombat X, it has the same automatic update system from Injustice that allows for hotfixes."

"Ed Boon guarantees, that the online features are much more complex this time around. For example when you start the game you get to choose your own alliance from five different options: Lin Kuei, White Lotus, Brotherhood of Shadows, Special Force and Black Dragon. Basically each team gathers so called "battle points" for their team, which decides how the game's menus look both in single and multiplayer. This way each player contributes to the entirety whether or not you prefer the social aspects or playing by yourself."

"Even more diverse content is promised, for the challenge tower is making it's return. This time around the towers and their challenges change constantly, even by the hour."

We are still expecting an official announcement and a trailer from Netherrealm Studios.

We wish all of you a Merry Christmas and a Happy new year!!! 2014 is already behind us and we decided to take a look at some of the things that will make 2015 one of the most exciting years for the Mortal Kombat fans around the world. Here are a couple of the things we can expect to happen this year:

Mortal Kombat Conquest DVD Release
March 31 2015 will be the day fans of the Mortal Kombat: Conquest TV series have been waiting for for nearly two decades. On this day the complete series will finally be released on DVD in the US. The box is already available for pre-order on Amazon:

Visit our Mortal Kombat: Conquest section to learn everything about the TV Series.

Mortal Kombat X Release
April 14th 2015 will definitely mark this years' highest point of excitement for the Mortal Kombat fans as the next installment of the fighting game series will finally be released on the current and the previous generation of consoles and on Windows PC.

Up to this date, Netherrealm Studios will release tons of videos, trailers and artworks as more and more game details and characters are announced.

The excitement around Mortal Kombat X will not end here as the rest of the year will be filled with the release of DLC characters, uncovering secrets and god knows what else.

Mortal Kombat Legacy Season 3
It doesn't matter that the third season of Mortal Kombat: Legacy neither has an official announcement nor an official release date as all other indications are pointing towards its ongoing production with actors tweeting and posting pictures from their training sessions and with the recent release of season 2 on DVD and Blu Ray. Whether the release of Season 3 will be tied to the release of the game is still unknown and as the time passes highly unlikely. But we are highly optimistic that we will see the third season this year.

And if all of this isn't enough, here is what we thing might also happen in the near future.

With the release of Mortal Kombat X on the next generation of consoles and with these gathering more and more popularity a release of Mortal Kombat: Arcade Kollection for XBox One and PS4 seems to us like a logical next step for the franchise. And if we dare dreaming today, we would also like to see an enhanced version of [mk9][mk9] for the new consoles. But we don't think that all this is possible in one year, but who knows, may be down the road at some point.

For now, enjoy the holidays and prepare for MORTAL KOMBAT!!!

Which brings me to a good followup question, are there any plans for platform-specific characters like Kratos in Mortal Kombat 9?

We have no platform exclusive characters planned for MKX.

In the interview he also talks about Goro, the tournament scene and a little bit about the resurrection of previously killed characters by the sorcerer Quan Chi.

All about the Mortal Kombat X Comic Books

From the official press release:

MORTAL KOMBAT X, in development by NetherRealm Studios and to be published by Warner Bros. Interactive Entertainment, is the next installment in the critically acclaimed game franchise which continues 25 years after the events of 2011’s MORTAL KOMBAT. The new comic book series of the same name will serve as a prequel to the game and will feature many favorite characters and the next generation of Kombatants. The series is being written by Shawn Kittelsen with interior art by Dexter Soy and covers by Ivan Reis. The series will debut in January 2015.

DC Comics has already revealed the synopsis for the first 4 digital chapters and the cover art for three of them. Take a look:

#1: Get over here…for an all-new digital-first series set before the events of 2015’s highly anticipated game Mortal Kombat X! Prepare yourself for the brutal adventures of all your favorite Mortal Kombat characters and witness the rise of the next generation of Kombatants!
#2: Scorpion and his newest companion set off in deadly pursuit of Raiden! Meanwhile, as the daughter of Johnny Cage and Sonya Blade, Cassie Cage thinks she’s seen it all. But when she finds herself in an illegal MMA deathmatch, Cassie must decide if she’s ready for her first taste of Mortal Kombat!

#3: As the civil war in Outworld rages on, Kotal Kahn suffers an unimaginable loss and enlists the power of the Kamidogu to avenge his fallen ally. But will blood magic make Kotal powerful enough to take down Outworld’s champion? Enter: Goro!
#4: Scorpion vs. Raiden! Red Dragons vs. Black Dragons! And a powerful new threat emerges! You do not want to miss the blood-soaked finale of our first story arc!

Additional information about the Mortal Kombat X comic books, including the currently available release schedule, can be found on this dedicated page.