2. In the scene with Scorpion and Johnny Cage in the forest, you can see a car drive by in the far left corner. You have to look really close though.

3. During the fight between Scorpion and Johnny Cage if you look carefully you will notice that in one of the scenes Cage's trousers are torn in the seat. Below is the screencapture. 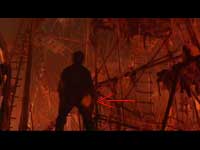 Only a few seconds later you will notice that there is nothing wrong with his trousers. They will be just like new until the end of the movie. 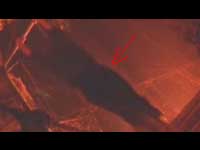 4. In the end of the scene where Scorpion fights Johnny Cage, Cage is on the ground surrounded by bones and skeletons. Scorpion appears before him, and we see a close up of his face. He moves his hand towards it, as if he was going to remove the mask, 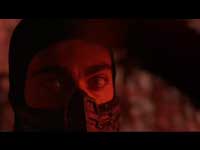 but in the next shot, his hand is no longer on his mask, and he does the same movement again. 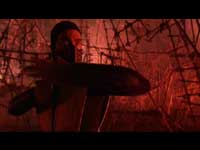 5. Where Shang Tsung kidnaps Sonya and take her to Outworld, you can see the green markers used for camera positions, lighting plans, or actors' marks on the floor. 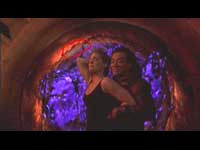 6. In the scene where Kitana, Lui, and Johnny are headed toward the Black tower in Outworld, or when Kitana is explaining that Outworld used to be a beautiful place (same time) there is a large screen shot overhead and you can see the shadow of a man on a wall is holding a microphone. 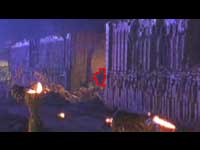 7. In the final fight (Liu Kang vs Shang Tsung), after Liu Kang has defeated the five people Shang Tsung made appear, Liu goes to the middle of the floor (and MK logo) and says "Is that all you've got, sorcerer?" Immediately after this line, the camera angle (and shot) changes, and if you pay attention to the MK logo on the floor, notice that Liu Kang turns 90 degrees between the shots without taking a single step. 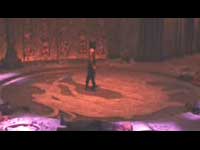 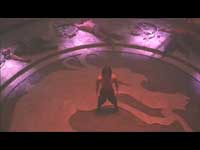 8. In the scene at the end where the spikes rise from the dragon pattern in the floor, if you look carefully you can see that the spikes are tearing through tin foil. 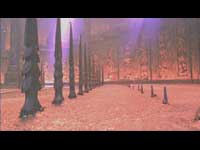 9. In the final fight scene between Liu and Shang Tsung, Liu hits Shang in the face repeatedly, but there is one extra hit sound for which there is no motion.