The official Mortal Kombat YouTube page has just uploaded the Mortal Kombat 11 Aftermath Gameplay trailer, featuring all of the new characters (Fujin, Sheeva and RoboCop) with all of their moves and Finishers, and also the new Stages and Stage Fatalities. And yes, it there is a ton of stuff going on in that trailer that can be even overwhelming, but in a good way of course

Also, as you can see at the end of the trailer, the Eternal Skin Pack has been renamed as the Eternal Klash Skin Pack, and the Skins for both Scorpion and Sub-Zero in it also have been updated a little bit.

Here is the trailer below, enjoy:

Also, thanks to the official PlayStation Twitter page, we also have a look at one of RoboCop's cosmetics set, which includes one of his Skins and a set of Gear pieces. As you can see, this Skin is heavily resembling the look of the Cyber-Ninjas from the Cyber Lin Kuei which debuted in Mortal Kombat 3.

And finally, we have even more screenshots featuring the new characters coming in the Aftermath expansion. 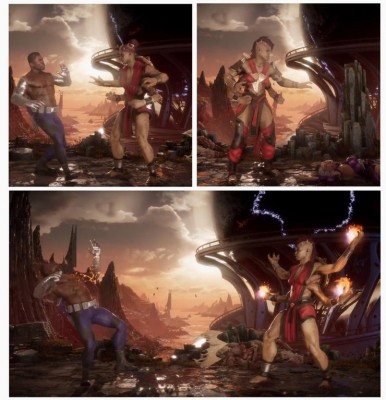 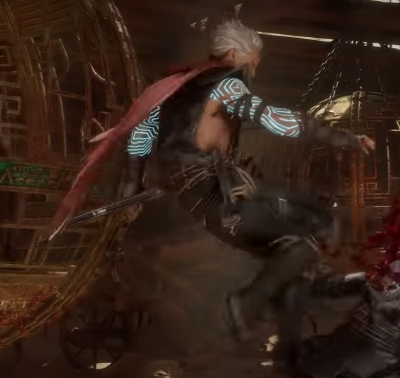 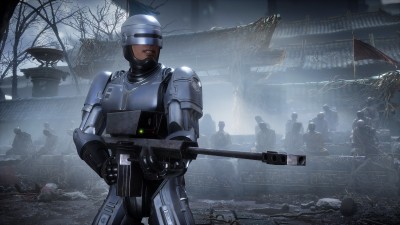 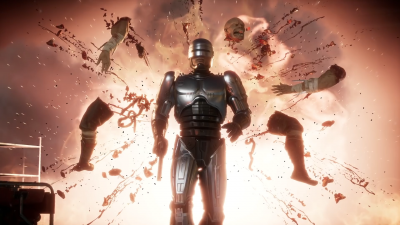 That's surely excellent stuff overall. Stay tune for more info as we head for the MK11 Aftermath expansion to arrive on May 26.

We have yet another Mortal Kombat 11 Aftermath screenshot, featuring RoboCop attacking Fujin with a Flamethrower. Here it is: 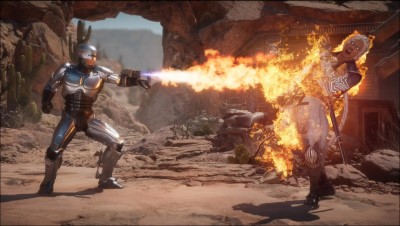 UPDATE:
We now have two more additional screenshots from the official Mortal Kombat Twitter page, for both the Soul Chamber Stage that has debuted in Mortal Kombat 3, and the all new Kronika's Keep Stage.

Arcade machines are known for massive size and high price, but if you could get one of those machine, it would defiantly worth it for long time gamers of the golden days of Arcades, including for the old school Mortal Kombat players who grew up playing MK games at the Arcade. But what if you could play an MK game on a small, mobile Arcade machine? Well, it's seems it is possible.

Pro MK player and YouTuber Ryan "Ketchup" Neal made of video showcasing a gift that he received, a tiny mini Arcade machine of Mortal Kombat 1 (with a side-render of Scorpion from Ultimate Mortal Kombat 3) created by a company called "Basic Fun". And yes, by "tiny", I mean it literally. It is essentially a handheld console in a shape of an Arcade machine, completely stand-alone and, doesn't plug into anything and is battery-powered. The machine comes with a small Arcade stick and 6-buttons, with the Block button receiving two buttons that can be pressed for it (they are both located next to each other) and this port of MK1 is the Sega Genesis port of the game, as the graphics and soundtrack of the game indicate this. Obviously, you can't play against other players on this, but you can still play all 7 of MK1 characters in the full Arcade mode, along with the Reptile secret match, Endurance matches, Boss matches against Shang Tsung and Goro, and the Test Your Might mini game.

A very interesting port indeed which would be a nice addition to the collections of MK fans. If you're interested to find more about Basic Fun and their port of MK1, click here.

In previous news posts, we reported on the Speedrun world records for Ultimate Mortal Kombat 3 set by players Ryan Neal AKA Ketchup and Lee Woods, and also for Vanilla Mortal Kombat 3 set by player Outworld. Now Ketchup has put together an amazing video detailing the history of UMK3 Speedrun with all of the records that were set by players and all of the tricks being used by them, as well as the controversies surrounding some of the methods used for those Speedruns, and even a quick glimpse at the history of Speedruns for Mortal Kombat II and Vanilla MK3.

Check out Ketchup's video below, enjoy.

Over the past month and especially since the latest Mortal Kombat 11 Kombat Kast, the vocal minority have expressed a lot of complaints regarding Sindel in MK11 and her new plot twist of her being evil rather then good, while keep stating that this an entire retcon. Although that might be ignored, the vocal minority has gone way too far, as Shawn Kittelsen of NetherRealm Studios, the writer behind the Mortal Kombat XL Comic and the current MK11 story, has received a ton of harassments and threats on Twitter, all over Sindel alone, and even worse is that he had to deal with all of that while his son has suffered from frightening illness over the past couple of weeks. Kittelsen then responded with this series of Tweets below:

Thankfully, Kittelsen's son seems to get better, and Kittelsen has put out another Tweet with his MK11 Noob Saibot sketch:

Author's clarification: To all of those who don't like this plot twist for Sindel, I understand that this is what you used to see regarding the character since Mortal Kombat 3, but that doesn't mean you can just attack, harass and threat the workers at NRS because of this alone. All it does is putting a black cloud of bad reputation on the whole NRS community, and like Kittelsen said, it only devalues your opinions. They are people just like you. If you wanna express your opinions, do it in a respectful and constructive manner, but in such a toxic fashion like this. And once again, it's only a plot twist, not a full retcon. And it's only for the current timeline that has started since Mortal Kombat 9 (2011), not the original timeline that ended in Mortal Kombat Armageddon. Once you put everything together that happened from MK9 to MK11 it all makes perfect sense. Not to mention that there is a small chance Sindel might not end up like that for the next game since she is a DLC character in MK11, although Stephanie Brownback has stated in the Kombat Kast that this is canon, so it's extremely unlikely that to change, even though that once again, it makes perfect sense.

Just be smart and respectful, that's all.