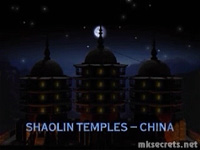 The stage begins out at the Shaolin Temples in China on a dark, clear, full-mooned night. Sub-Zero is to break into the temple headquarters and steal a sacred map of elements for his master. The map is useless to him, yet holds a lot of sentimental value for the sorcerer, Quan Chi. The gameplay begins with Sub-Zero's breaking through a window. He stands there for a moment, before being met by Scorpion, his arch rival. 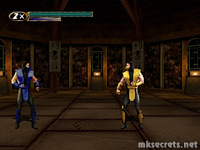 Scorpion says either one of two things to his enemy. (see pic above) "I will succeed" or "You will fail". he then laughs ominously while running off into the stage. You're stuck there for a few seconds, before the computer lets you take over Sub-Zero's controls. Run all the way to the right to the huge concrete door. It should open. you're met with your first enemy. Seeing that it's the first guy, he'll probably just stand there like a moron. practice some basic maneuvers on him. All of the basic tactics from the Mortal Kombat games are back. However, the jump punch into a combo trick doesn't work. 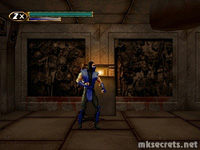 Run through the hallway and another room, defeating any other enemies you come upon. Be careful when you get to the 4th room however, because there are huge pillars embedded into the ceiling, waiting to smash whoever comes along. You can see the pillars in the top right hand corner of the above picture. Simply get right in front of the lamp in the background, and press LK. the pillar should fall, and as soon as it rises, run under it as soon as possible. If it doesn't fall, get a little bit closer and press LK. If you get too close, you may be pinched by the pillar, or crushed all together. 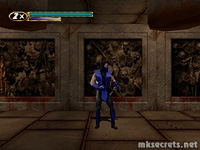 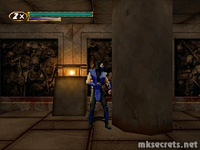 If you get too close to the pillar when it goes down like in pic above, it won't go back up. So back away about 1-2 steps, let it go up, and as soon as you can fit under it, run under it to prevent from getting crushed to death. 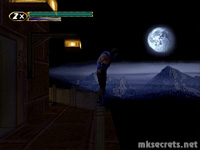 After running under both pillars, open up the concrete door, and go through the next room, defeating any enemies that may come up. You should probably have enough experience points to gain the ice blast by now (B, D, F, LP). Once you get to the end of the room, there will be an outside area with a ledge. Get right next to the ledge, then carefully do a straight up hop (up on the controller), and try to land right on the ledge. This could be tricky, and may take some practice. Be careful not to jump too far out, because you'll fall to your death. Once you're on the ledge (see pic), just jump, but remain as close to the building as possible, and don't jump way out. You should land on an awning and land safely on your feet at the bottom. This is the first checkpoint. 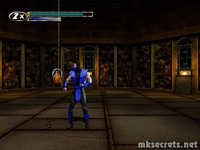 Run back into the building and to the left. You should come up to a rope with a herbal healer icon attached to it (see pic above). Don't climb the rope just yet, because there is a locked door at the top of it. Grab the herbal healer by using the action button, and press select to access the inventory screen. You should always try to pick up herbal healers, and any other icon, because they are extremely useful. Run through the rest of the room and open the concrete door. 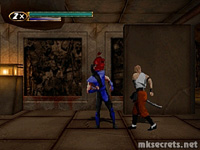 Watch out, this is another hallway with pillars, only this time they are more tricky. Fight off any remaining opponents. A fun thing to do is to freeze one of the opponents, then roundhouse them into the path of a pillar, then press LK. They get smashed.. hehe. Once you've fought off all of the opponents, get about 4-5 steps away from the pillar and press LK, just like last time. Watch your back though, because enemies like to come through the door behind you and shove you right into the path of the pillar (see pic). Once you've gotten under the first pillar, be careful! these pillars differ from the previous ones in that they are closer together. If you attempt to press LK between these 2 pillars, chances are you'll get pinched by the pillar on the left, then crushed by the one on the right. The solution? Just get as close as possible to the 2nd pillar without being crushed. Sooner or later it should fall, and you will be able to run under it. If not, keep trying. 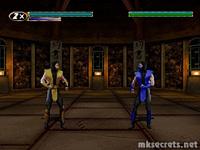 After passing the pillars, open the concrete door. The computer should take over for a few seconds, as Sub-Zero walks up to meet Scorpion. This is the final boss for stage #1. Scorpion says "The map is mine, Sub-Zero" (see pic). Then an announcer says "FIGHT!", and you're free to fight each other. Scorpion is pretty easy, and if you're good at any of the previous 2-d MK's you'll have no problem with him. Just freeze him, then run up and do his 6-hit combo (HP, HP, LP, LK, HK, B + HK). Or, get creative and combine the ice blast, combos, and slide (if you've obtained it yet) into a combo. 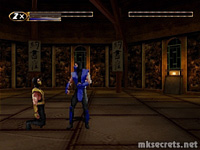 If you're able to beat Scorpion, an announcer will say "FINISH HIM!" and Scorpion will fall to his knees pleading "Spare me!" (see pic above).

If you'd like (and who wouldn't like), tear out Scorpion's spine by pressing F, D, F, HP. This is a bit tricky, and you can't be right next to Scorpion. Take about 2-3 steps back, then perform the motion. Scorpion's head will tear out, and blood will shoot up. Then he'll fall to the ground where a pool of blood will gather. 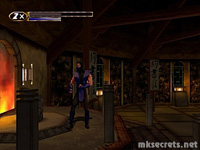 After finishing Scorpion, run to the left, and go up the two small platforms. The map of elements should be spinning in front of the fire on the far left of the screen (see pic). You won't be able to touch it. just press the action button (defaulted at L1/A), and the camera will switch to a scene of the concrete door opening at the top of the rope. It will than flash back to Sub-Zero.

Now run back to the right, all the way through the entire stage, until you get to the room with the rope. Jump up on to the rope and climb it until you reach the top of it, which should now be outside in the moonlight. Go all the way to the top of the rope, then jump off of it to the right, just like you'd do a normal jump (diagonally right on the pad). Sub-Zero should flip off of the rope, then cut to the fmv where it shows him flying down a zip cord. He then returns the map to his master and learns of his new mission. You have completed stage #1.