Win Tournament Mode with player one and instead of seeing your fighter with its prize you are going to see this: 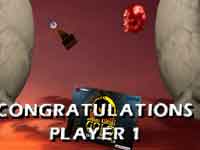 Activate the Cheat Menu and then turn on Fatality 1. Now you can perform every character's first fatality with only one button (HP). Now do this with Kung Lao or with Baraka and they will not perform their own finishing moves but Kai's one instead: 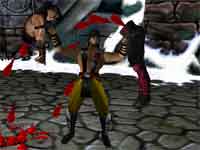 Choose Reiko as your fighter. Try to break the arms of your opponent three times in a row. On the last time Reiko will jump away from the opponent. He will fall on the ground and will make an orb. The "Maximum Damage" will appear.

It's almost impossible to time this on purpose: if your opponent hits you with a move that knocks you down (but you still have more energy left) at exactly the same time you hit him with his dying hit, you will be lying dead on the floor and not be able to do a Fatality, but still be announced as the winner while you lie flat on the ground. It's not a draw since you still have more energy left, but you can't move.

Perform Raiden's Teleport or Sub-Zero's Ice Clone while in the corner and while your opponent is walking toward you. After the move you may find yourself stuck an the wall or in an arena object. 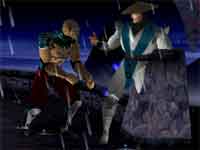 A Skull Under a Skull:

When you're wearing Scorpion's 3rd costume (gray with skull exposed), Breathe Fire (Down - Forward - LP) and Scorpion will take off his skull revealing another skull underneath before breathing fire (the removed skull will appear as his normal black and yellow mask). This also happens if you do his first Fatality.

Spikes in the Air:

If you turn on stage fatality from the cheat menu, you will be able to perform Goro's Lair fatality on every background, including those that don't have seeling. 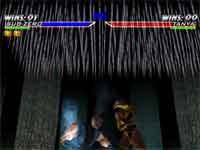 Big Headed Reiko Through The Camera:

Using Reiko in Big Head Mode (321-321), do his Spinning Teleport move (Back - Forward - LK) to see an amazing graphical glitch with the camera during the spin animation. 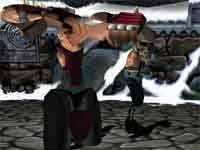 In a 2-player game at Goro's Lair, The Tomb, or The Well, choose Tanya or Kitana and play against any character. Enter the "Weapon Kombat" KK (002-002) at the VS screen so that you can't drop your weapon. Throw Tanya's/Kitana's boomerang and jump when it's on its way back so you'll drop it. Now pick up an object that's on the ground (depending on which stage you're on). The object will act as a normal weapon in your hands since you won't drop it.

Stuck In The Floor:

If you're using Reptile and you Acid Spit (Down - Forward - HP) just when your opponent is jumping over you, the first half of the bubbles will be directed at your opponent's original position, while the rest after it will be going the opposite direction (the side your opponent has jumped to).

1. If you use Sektor's Laser Gun and drop it, part of it will sunk in the floor like this:

2. If Cyrax gets hit in the moment he is pulling out his light saber, the weapon will fall on the ground and the red light will remain incomplete:

3. Kitana's weapon acts just like Tanya's boomerang. If you throw it it comes back. But for some very strange reason unlike Tanya, Kitana is unable to catch it.

Activate Big Head mode by entering 321-321 as Kombat Kode. If your arena has interactive objects (skulls, stones,...) they will appear a lot smaller as they usually are:

When you've used the Big Head mode Kombat Kode (321-321), the players' heads will shrink back to normal size when it is severed by a Fatality such as a decapitation or explosion (For example do Raiden shock fatality).

Use Shinnok and Activate Big Head mode by entering 321-321 as Kombat Kode. Now perform his Hand of Death Fatality. His hand will appear so big, that even after disappears part of it will remain on the screen. 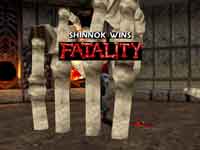 Sometimes, when you perform Sektor's flame thrower fatality, the loser's upper torso is backwards from their legs, and they just wiggle around instead of running in a circle and screaming.

If you rotate Tanya's picture on the character select screen you will notice, that it has a question mark on the other side. Usually this marks a hidden character, but not in this case. This ? is probably what remained of Belokk. 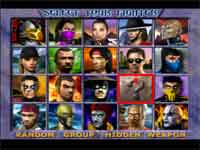